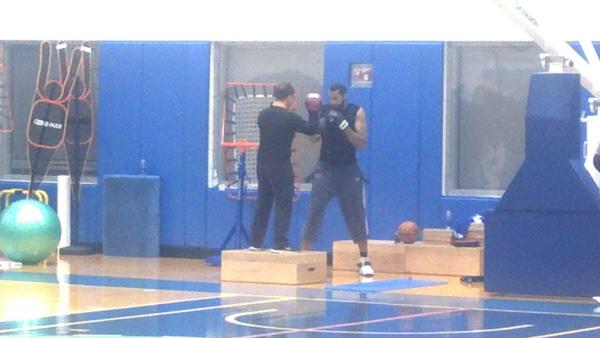 GREENBURGH, N.Y. — Rasheed Wallace isn’t quite ready to play fullcourt basketball yet, but he looks like he could go a few rounds with Apollo Creed. Wallace, 38, spent part of Monday’s Knicks practice off to the side firing punches in boxing gloves while strength and conditioning coach Dave Hancock wore hand mitts. Wallace, it should be mentioned, is the NBA’s all-time single-season (41) and career leader (304) in technical fouls. “I mean, it’s all geared for conditioning,” Knicks coach Mike Woodson said of Wallace’s boxing techniques. “These guys do a lot of different things around here that we didn’t do when we came up the old-school way. But it’s all conditioning work to better the player, and eventually we’ll get him out on the floor ready to play.” Wallace, who last played during the 2009-10 season with the Boston Celtics, took shots with a basketball off to the side after practice was over, and told reporters last week he hopes to be ready for the Nov. 1 season-opener at the Brooklyn Nets. “Don’t know yet,” Woodson said. “We’re still monitoring him, we’re still training him off the floor and eventually he’ll be ready to go.”