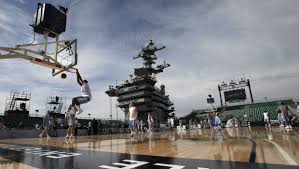 NEW YORK — Kentucky is “highly unlikely to participate in the 2013 Carrier Classic,” a Kentucky source told SNY.tv. A source close to the event earlier told SNY.tv that Kentucky was among the schools invited and expected to headline the expanded 2013 event. Texas, N.C. State, Missouri, Florida State, Gonzaga and Davidson are among the other schools invited to participate in the eight-team event, according to the source, who was not authorized to speak publicly. The source said four teams had so far agreed to participate. “We’re going to expand the event and invite more teams so we can do more for the military,” Michael Watkins, Tournament Director Operations, said at a press conference here promoting this year’s game between Ohio State and Marquette Nov. 9 on the USS Yorktown in Mt. Pleasant, S.C. This year’s game will be broadcast by the NBC Sports Network and the source said next year’s games would also be televised. “We have a significant offer from a broadcaster,” the source said. The 2013 event will be held at multiple military-themed locations, potentially including the USS Yorktown, the USS Lexington in Corpus Christi and the USS Midway in San Diego. New Orleans, which hosts the National World War II Museum and hosted the 2012 Final Four, could also host a Navy carrier. Last year’s game featuring North Carolina and Michigan State raised more than $500,000 for the Wounded Warrior Project, the Navy Marine Corps Relief Society and the San Diego Air & Space Museum. “We’re not forgetting about the troops,” the source said. “We don’t want people to be forgotten.”

Agau to Louisville; Newkirk to Pitt