J.R. Smith on Money, Lin and the New Season 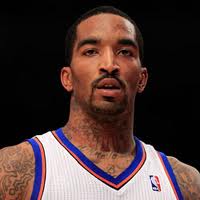 MONROE TOWNSHIP, N.J. – J.R. Smith has never been one to be coy and not speak his mind with the media. At the Monroe Sports Center where he and his brother, fellow Knicks guard Chris Smith, were running a basketball clinic, Smith was approached about several topics and as usual, he mostly shot from the hip. The New Jersey native and former St. Benedict’s Prep star came home in February from a playing stint in China, played the final 35 games of the lockout-shortened 2011-12 season with the Knicks and thought he played well enough that he decided to test free agency by declining his 2012-13 player option worth $2.5 million. Smith stood by as the team declined to match the Houston Rockets’ offer sheet to Jeremy Lin, but only after it declined to match the Toronto Raptors’ offer sheet to Landry Fields worth $20 million over three years. The Fields contract, which was done partially in an attempt to try and secure then-free agent point guard and Canada native Steve Nash, was proof that the money was out there for a player like Smith, who matched his career average of 12.5 points while shooting almost 34 percent from 3-point range. Smith has said publicly that he had more money offered to him, but in the end, liked being home and liked playing for the Knicks. He ultimately signed a two-year contract with the second year being a player option. He will make $2.8 million this coming season under the contract. Smith stood to make $2.4 million had he opted in, but by opting out, had the option to do a multi-year deal (up to four years) with the Knicks starting at $2.8 million or at the mid-level exception. “I think anything is a bargain with me, whether I’m playing for a dollar or $20 million it’s a bargain because I’m going to play hard no matter what,” Smith told SNY.tv. “No matter how much I get paid, it will never affect how hard I play and I think that should be thought about when people see me next year.” The decision to not bring back Lin for the three years and $25 million given to him in Houston was viewed as a largely unpopular move. Knicks head coach Mike Woodson had said on the record Lin would definitely be back and he would be the starting point guard. Instead, the Knicks let Lin walk after he became a global phenomenon and helped save a season that was quickly going nowhere. The plot of what would happen to Lin was a national storyline until the Knicks officially declined on July 17. “I was on the outside looking in waiting for my deal to get done during that whole thing and just see what pieces we would pick up instead of Jeremy Lin,” Smith said. “We got some good pieces. Jeremy is a good player, he was good to me and I have nothing bad to say about him. I wish him the best of luck, but we’re gonna kick their ass next year.” Instead of Lin, the Knicks are slated to go with a point guard trio of free agent acquisitions Raymond Felton, Jason Kidd and Pablo Prigioni, who is a 35-year old Argentinian rookie. Smith is slated to start at shooting guard while Iman Shumpert is out until at least December with a torn ACL and lateral meniscus and Ronnie Brewer is on the mend for six weeks following knee surgery. Once everyone gets healthy, the roster as currently constructed is being viewed by most as an improvement over last season and one that figures to contend in the Eastern Conference. “Me and Melo have been on the same team for the last six years and ever since we’ve been together, I feel like we’ve had a championship-caliber team,” Smith said. “It’s just a matter going out there, passing the ball, playing defense and playing team basketball.” Follow Josh Newman on Twitter