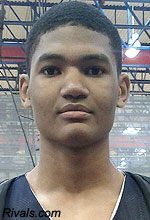 Despite a report that Kyle Washington has cut his list to four schools, Brewster Academy coach Jason Smith says six schools remain involved for the 6-foot-9 forward. N.C. State, Ohio State, Washington, Marquette, Louisville and Iowa State remain in the mix, Smith told SNY.tv Friday morning. “Baylor is out,” Smith said. “Marquette is still involved, as well as Louisville.” Baylor dropped out after landing a commitment this week from 6-8 forward Johnathan Motley of Houston North Shore. “He was schedueld to be at Baylor this weekend,” Smith said. “But they got another commitment on Wednesday.” Kyle Washington will now visit N.C. State the weekend of Sept. 21 and Washington the weekend of Sept. 28. Smith said N.C. State coach Mark Gottfried, Washington coach Lorenzo Romar and Iowa State coach Fred Hoiberg, as well as a Marquette assistant, have all been in recently to see Washington. Marquette coach Buzz Williams, Louisville coach Rick Pitino and Ohio State coach Thad Matta are expect “at some point in the next week.” As for Washington himself, Smith raves about him and says he will be a team captain. “He’s a lot better than people realize,” Smith said. “We’ve been fortunate to have had some talented bigs over the years at Brewster. Kyle is right on par to where they are. He’s skilled in the post, he’s got excellent footwork. “I think he can play really anywhere he wants. I’m excited to coach him. He’s been an excellent leader, vocal, positive, he works hard. He’ll definitely be one of our captains this year. He can play really anywhere he would like to.”

SNY's Books for Back to School Contest