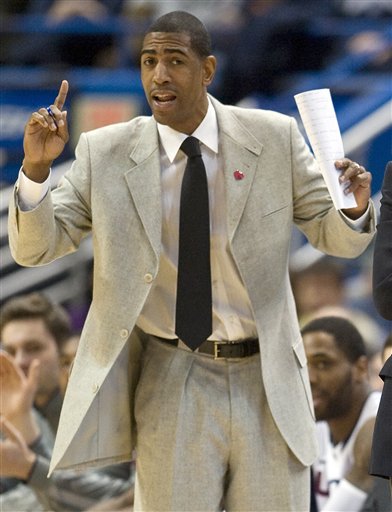 Jim Calhoun hadn’t even officially retired as head coach at the University of Connecticut on Thursday afternoon, yet the Huskies already had secured his successor. Kevin Ollie, a former standout guard for Calhoun from 1991-1995 and an assistant coach under Calhoun for the last two seasons, has been named the head men’s basketball coach at his alma mater. Ollie, a 13-year NBA veteran, will have a contract that runs through April 4, 2013 that will pay him $625,000. He becomes the 17th head coach in UConn history, the fourth since 1969-70 season and just the second since 1986-87 with Calhoun now retired. “I am very honored and humbled to become the UConn men’s basketball coach,” Ollie said. “I cannot put into words how grateful I am to Coach Jim Calhoun, who retires today as one of the most legendary coaches in the history of college basketball. Coach Calhoun brought me here to Connecticut as a person right of high school and has mentored me into the person I have become today. ” Ollie is going to have some big shoes to fill as Calhoun leaves Storrs with a 625-243 record (873-380 overall), having taken a sleepy, dormant New England program and turned it into a perennial Big East and national championship contender. Calhoun’s three national titles (1999, 2004, 2011) make the Hall of Famer one of only five coaches to win at least three national titles, the others being John Wooden, Adolph Rupp, Bob Knight, and Mike Krzyzewski. “I always said that I would know when it was time, whenever that might be,” said Calhoun, who made the official announcement Thursday afternoon at a news conference at Gampel Pavilion on UConn’s Storrs campus. “The hip injury (suffered in early August) really didn’t enter into the decision, except that it gave me more time to think about it and the more I thought about it, the more I became convinced that this was the right time to move on to the next phase of my life.” Photo: Associated Press Follow Josh Newman on Twitter