Notre Dame’s Loss Not Huge on Hoops Side 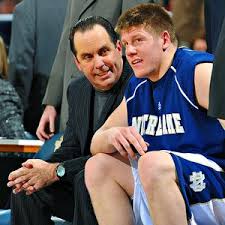 Notre Dame basketball coach Mike Brey is a tremendous coach on the sidelines and a great quote in the press room, and he will be missed when the Irish depart the Big East for the ACC. His basketball team? Not so much. While the general perception may be that the Big East took another big hit Wednesday when news surfaced that the Irish were ACC-bound, the reality is that Notre Dame isn’t a huge factor on the basketball side. “Not that big of a hit,” one Big East coach told SNY.tv. While Notre Dame has made six NCAA appearances since 2003, only once during that time did they reach a Sweet 16 — and that was in 2003. Consider that in that same time, Memphis — which joins the Big East in 2013 — made eight tourney appearances, three  Elite Eights and advanced to an NCAA title game (which was later vacated). Sure, sure, John Calipari led those teams and they came out of Conference USA, but most coaches will tell you Memphis — and Temple, which made an Elite Eight in 2001 — are better programs than Notre Dame. And probably just as good as Pittsburgh and West Virginia, which also left or are leaving the Big East. In fact, Brey was a proponent himself of adding Memphis, Temple and even Houston to the Big East. “I think Temple would be great,” Brey, who did not return a phone message Wednesday, told SNY.tv a year ago. “I want Memphis because we need basketball star power because we’ve lost some. Memphis brings a basketball program, and we’ve just lost two horses. We need to be mindful of our basketball stuff. And I think Houston can give us a little bit. Memphis really gives you that star power. “I like a Temple and a Memphis and a Houston because of their basketball. I don’t really care about their football.” Yes, this whole deal would’ve been worse for the Big East if Notre Dame played football in the league, but they don’t, so it’s not that much of a loss. And when you consider that ACC Commissioner John Swofford has stated that his league will stop with 15 basketball teams and not expand to 16, that is also good news for the Big East. UConn and/or Rutgers could still be pursued by, say, the Big Ten, but they won’t be heading to the ACC anytime soon. Sure, losing Syracuse was the biggest blow to Big East hoops. And the Orange will never be replaced, even if it’s still hard to imagine Syracuse fans traveling to Greensboro, N.C., for a basketball tournament in anything close to the same numbers they bring to the Garden each March. Louisville and Cincinnati are also likely to stay put in the Big East while the Big 12 remains at 10 teams. And old-school Big East stalwarts like Georgetown, Villanova and St. John’s remain alongside newer powers like Marquette. So, all in all, while we will miss Mike Brey in the press room, his team won’t be that huge of a loss.