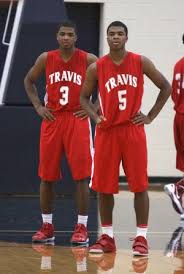 Since today is the first day college coaches can meet with recruits, here’s a quick Recruiting Rundown that I’ll likely update as the day goes along: **No coaches came to watch Andrew Wiggins Sunday at Huntington (W.V.) Prep because he is out of town until Sunday evening. That news was first reported by Scout.com, and confirmed by Huntington coach Rob Fulford. Fulford said Florida State coach Leonard Hamilton is expected back Monday to watch Wiggins, but he’s not sure when Kentucky coach John Calipari might come. **Baylor had in-home visits at midnight with Huntington shooting guard Xavier Rathan-Mayes and big man Dominic Woodson, according to Scout. According to Coast2CoastHoops.com, Rathan-Mayes will meet with Texas (Sunday), Florida State (Monday), Illinois (Wednesday) and UConn (Friday). **Louisville is also expected to watch Huntington big man Moses Kingsley. **Baylor also completed on Sunday its home visit with the Harrison twins. The twins are also expected to host Kentucky, SMU, Villanova and Maryland between now and mid-week. Maryland’s visit is Monday. **Julius Randle will host N.C. State and Kentucky for home visits Sunday. He has nine home visits scheduled in the next week or so. Randle is expected to sign in the spring. **Rondae Jefferson had a great visit to Arizona, sources told SNY.tv, but has no other visits set at this point. **Syracuse coach Jim Boeheim is expected Monday at Roselle (N.J.) Catholic to watch 2013 F Tyler Roberson, as are coaches from Rutgers and Seton Hall. SMU head coach Larry Brown and assistant Jerrance Howard had an in-home Sunday with Roberson. And Kentucky is expected to watch him Thursday. For more on Roberson, click here. **Bill Self of Kansas and Rick Pitino of Louisville are expected to watch Northwest Florida PG Chris Jones Sunday night, while Baylor and Memphis are in Monday. **Hudson Catholic forward Reggie Cameron will hold a workout Tuesday in which most, if not all, of the schools on his list are expected to attend. His list includes  UConn, Georgetown, Miami, N.C. State, North Carolina, Seton Hall and Michigan. **Ohio State head coach Thad Matta had an in-home visit with 2013 F Jordan Mickey that his father, James Wright, told SNY.tv “went really well.” Mickey has an in-home Monday with Oklahoma State. **Head coaches from North Carolina, N.C. State and South Carolina were at Oak Hill Sunday for wing Troy Williams and point guard Sindarius Thornwell. Ohio State, Indiana and Arkansas will be in Monday, head coach Steve Smith told SNY.tv. **Cal got a commitment from 6-3, 2013 SG Jordan Mathews, per Scout. That follows Jabari Bird’s pledge to the Bears last week. Photo: thedcdime.com