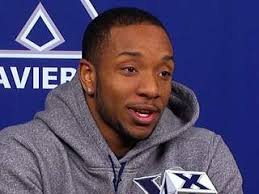 Former Xavier wing Dez Wells is headed to Maryland, a source with direct knowledge of the situation told SNY.tv. Tuesday morning. Wells chose Maryland over Memphis. He also visited Kentucky and considered Oregon. It remains unclear if he will be granted a waiver to be eligible this season or if he must sit and wait until 2013-14. If he is cleared to play this year, it would be a huge get for the Terps. Maryland is also in the hunt for the Harrison Twins, who will announce Oct. 29 from among the Terps, Kentucky, Villanova, Baylor and SMU. Wells, who averaged 9.8 points last season, was expelled from Xavier Aug. 3 for a violation of the school’s code of student conduct. Yet last week a Hamilton County (Ohio) grand jury opted not to indict Wells on  a sexual assault charge. FREE THROWS Olaf Schaftenaar, a 6-9 Dutch national player, verbally committed to Oregon State, a source with direct knowledge told SNY.tv. A big man who can pass, dribble and shoot, he is eligible right away….6-4 Gill St. Bernard’s guard Chris Jenkins committed to Florida Atlantic Monday. Photo: AP