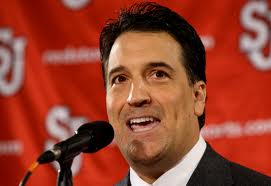 The search to replace new Charlotte Bobcats head coach Mike Dunlap on Steve Lavin’s bench at St. John’s is over. Mike DeCourcy of The Sporting News broke the news on Monday evening that former UCLA star and 13-year NBA veteran Darrick Martin will take the spot on Lavin’s staff. Aside from recruiting, Martin will also work with the team’s guards, a position where expectations are high this winter. Texas A&M transfer Jamal Branch enters the fold for Lavin, while leading returning scorer D’Angelo Harrison, and his 16.8 points per game are back for his sophomore season. A source with direct knowledge of the situation told SNY.tv that St. John’s is in ‘great shape’ with Martin in to replace Dunlap. Lavin, the former coach at UCLA, now has three Bruin men on his staff, including himself. Former Bruins guard Rico Hines, who was Lavin’s first recruit in Westwood, is also on staff. Follow Josh Newman on Twitter