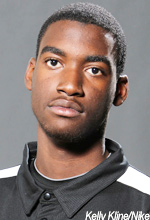 The Norvel Pelle Sweepstakes is finally over. The onetime St. John’s signee verbally committed to Iona Monday night, choosing the Gaels over DePaul, New Mexico State and Auburn. “It was a hard decision as far as picking from DePaul, New Mexico State, Auburn and Iona,” the 7-foot, 210-pound Pelle told SNY.tv by phone Tuesday night. “[I liked] the style of play, the team, the coaching staff, New York and just overall being able to play basketball and not just be a stuck at a position. I felt myself that that was the best decision I could make as far as going to Iona.” A Compton, Calif., native, Pelle visited Iona earlier this month and enjoyed his time with head coach Tim Cluess and associate head coach Jared Grasso, as mentioned in this story. He felt some level of familiarity with Iona guard Lamont “Momo” Jones, who played at Arizona, as well incoming guard DaShawn Gomez of Inglewood, Calif., and Iowa State transfer Tavon Sledge. “He played with a few of the players before,” said Rambo Rasheed, Pelle’s brother. “They got good chemistry. They play his style of play, they get up and down the floor. They led the nation in scoring. They’re one of the top mid-majors. A lot of things that went into it.” Pelle was one of three St. John’s players declared academically ineligible by the NCAA last fall — Amir Garrett and JaKarr Sampson were the others. Garrett arrived at St. John’s at midseason and Sampson will finally play this fall after spending a postgraduate year at Brewster (N.H.) Academy. Yet Pelle and his brother both expect him to be qualified to play this year at Iona. He plans to arrive on campus in a week or so. “Yes, I’m waiting on the NCAA,” Pelle said. Rasheed added that they were “waiting on the feedback” from the NCAA. A source close to the Iona program said they were “confident” Pelle would qualify. Pelle said he never considered St. John’s this time around because he had lost “communication” with the staff. “No, they weren’t recruiting me anymore,” Pelle said. “The communication between us was lost.” Rasheed said the Gaels are getting a “new-age” type player reminiscent of Kevin Durant. “I think he’s going to be what everybody is comparing him to right now,” Rasheed said. “A ‘KD type of player. a new age KD. Honestly, I think he’s going to be the new age basketball player. “He’s 6-11, he can handle exceptionally well. He can shoot it exceptionally well from the mid-range. He’s one of the fastest people up and down the court. His athleticism speaks for itself.” Pelle himself said he’s anxious to prove to everyone in the New York area and in the nation that he’s a force to be reckoned with after missing out on playing at St. John’s last year. “Yes, sir,” he said. “It feels like it’s my time to really showcase and put what I’ve been working hard this whole summer to show the world what type of player and what type of person I am. “I am excited to show the world a little something.” GAELS ADD BOWMAN FOR PERIMETER Iona also landed a pledge from 6-4 former Penn State guard Tre Bowman, according to the York Dispatch. “I plan on going to Iona and having a bright two years and then continue to play basketball — hopefully in the NBA,” Bowman told the paper. Bowman was booted from the Penn State team twice during the 2010-11 season according to the paper, and ended up at Midland (Texas) Junior College the following season before signing to play at Texas Southern. Now he feels he’s landed at his final spot at Iona, which recently received a decommitment  from 6-7 junior college wing Chris Cantino. “As long as I come in and work hard, I definitely should see some playing time,” Bowman said.