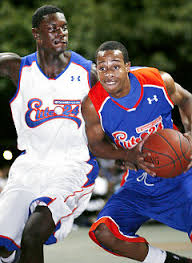 The Elite 24 game will return to New York City from Venice Beach, Calif., in 2013, a source close to the event told SNY.tv Friday. The event was launched in the summer of 2006 at Harlem’s famed Rucker Park and held at Rucker Park for its first four years. In 2010, the game moved to Venice Beach, in part due to weather concerns in New York. It remains unclear where in New York the 2013 game will be held, but the source, who was granted anonymity because he is not authorized to speak publicly about the move, said it’s definitely coming back to the Big Apple. This year’s game airs live on ESPNU at 7 p.m. ET Aug. 25, while the slam dunk contest will air August 24 at 7 p.m. ET on ESPNU. Among those invited to this year’s game are Andrew Wiggins, Aaron and Andrew Harrison, Julius Randle, Tyus Jones, Aaron Gordon, Jermaine Lawrence, Kuran Iverson, Aquille Carr, Rondae Jefferson and Jabari Bird. Next year’s event could include 2014 stars like Jones, Emmanuel Mudiay and Chris McCullough of New York.

Jabari Parker to Cut List to Five in September