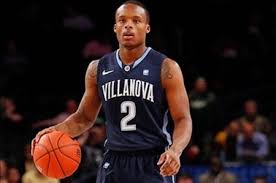 Maalik Wayns will get a shot to play for his hometown Philadelphia 76ers. The former Villanova point guard signed with the team Monday, according to multiple reports. The 6-foot-1 1/2 Wayns came out of Villanova after his junior year and went undrafted. He averaged 17.4 points and 4.6 assists last season. Philly.com reported that Wayns could make the team as a third-string point guard behind Jrue Holiday and Royal Ivey. If he makes the team, Wayns would team with former Big East rival Moe Harkless, the No. 15 pick out of St. John’s. The Website also reported that former Syracuse guard Scoop Jardine will “probably” receive an invitation to the Charlotte Bobcats training camp. Jardine, also out of Philly, averaged 8.9 points and 4.9 assists as senior with the Orange. Photo: BigEast360.com