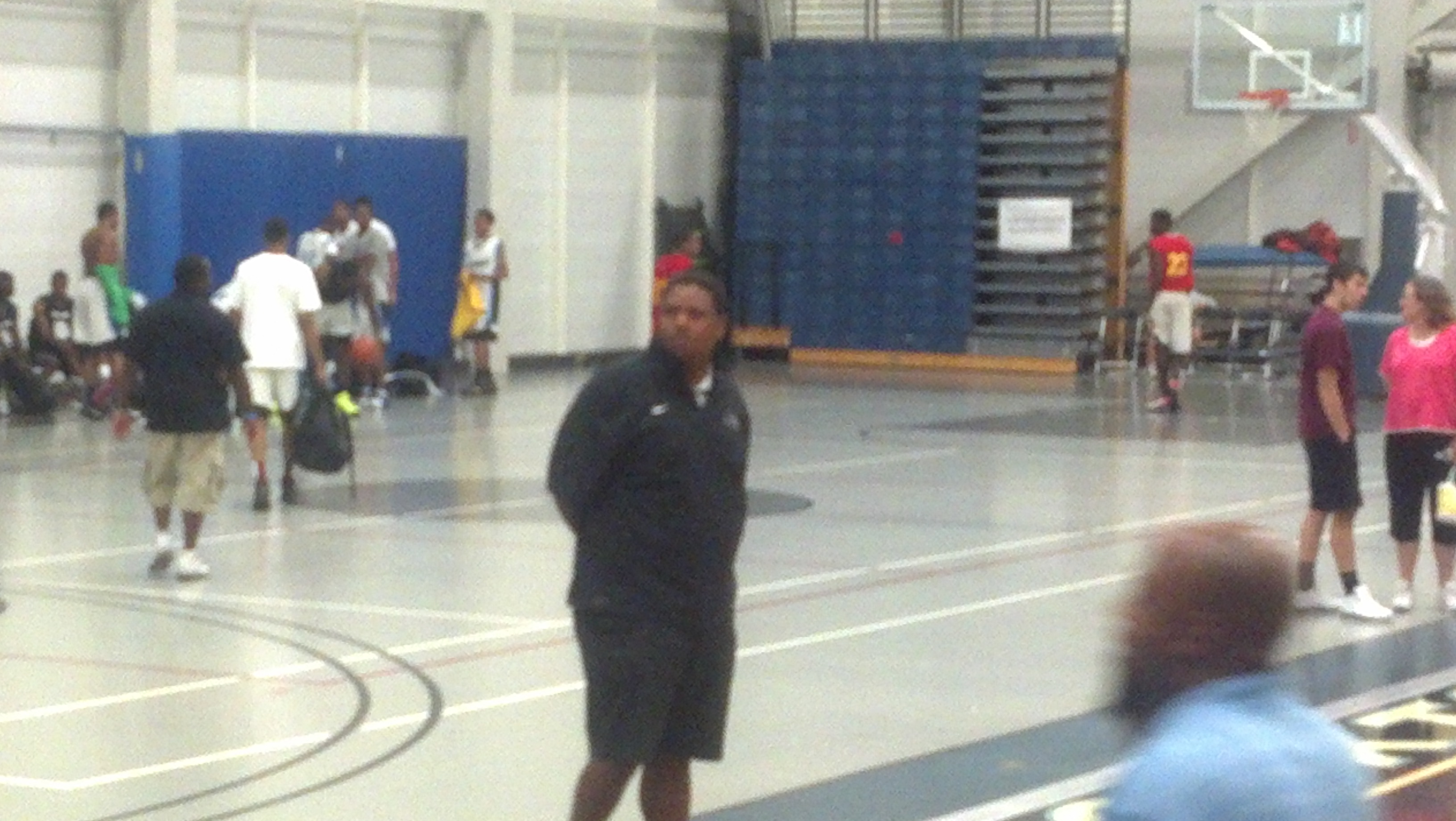 GALLOWAY, N.J. – In an effort to turn Providence around, head coach Ed Cooley is taking a two-pronged approach in recruiting. Cooley is going after some big national fish like Troy (Mich.) shooting guard James Young, who’s also being targeted by Kentucky, Michigan State and Syracuse, and he’s also trying to lock down the best talent in the New England area. That explains why he’s never far from the Expressions Elite 16s team that features 6-foot-8 2014 power forward Abdul-Malik Abu and 6-4 shooting guard Jared Terrell. Terrell missed the Expressions’s games at “Live in AC” with a fractured ankle, but he and Abu could end up going to college together. “They want to go to school together as of now,” Expressions coach Tyron Boswell told SNY.tv. Asked specifically about Cooley and his staff, Boswell said, “They haven’t missed a game all live period so they’re definitely out-working everybody.” Still, Cooley, West Virginia coach Bob Huggins, Maryland coach Mark Turgeon and assistants from Villanova, Temple, Rutgers, Penn State and others were on hand when the Expressions lost to Team Takeover in the “Live in AC” 16s final on Friday at Stockton College. “They got a gang of schools together,” Boswell said of schools interested in both players. “UConn, Providence, Cincinnati, Iowa State, Temple, Rutgers. Also Kansas [which] hasn’t offered yet.”

“My recruitment’s wide open but I hold offers from Michigan State, Providence, Cincinnati, Rutgers, Iowa State, Temple, a lot [of schools],” Abu said. Having already visited Providence, Rhode Island and Boston College with Terrell and several teammates, Abu is planning several more upcoming visits. “I’m taking an unofficial to UConn and Iowa State,” he said. “We’re not sure right now but definitely in August.” Abu sounds like the ultimate team player. Listen to this quote about what he wants to be in college. “I just want to bring an all-around game, moreso than anything,” Abu said. “I want to be an elite rebounder, an elite defender and a leader. Points and all that, there’s going to be people for that in college. I’m not looking to go to college and average 30 points. I’m looking to go to college to help any team that needs me to be as versatile as possible.” Abu’s athleticism and upside is pretty scary at this point. “I feel like if he gets another inch or two, he’s really got a chance to make some money,” Boswell said.

Terrell, who is injured, also has a strong upside. “He’s looking to be a combo guard but more of a 1/2 than a 2/1, but he’s able to open the floor up because he can make shots,” Boswell said.  “He’s just gotta become a better facilitator at this time.” Both Abu and Terrell are in the Class of 2014, but Boswell didn’t rule out that both could commit as juniors. Cooley, of course, hopes both land at Providence. But he’s got a lot of competition for their services already. “It’s basically on them and how they feel,” Boswell said. “Maybe net year, maybe this year, who knows? But at this point they’re just enjoying what’s going on and trying to feel out what school wants them.”

Andrew Wiggins: 'I got nothing left to prove'