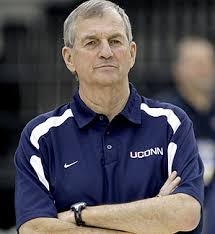 NORTH AUGUSTA, S.C. — Jim Calhoun says it won’t be difficult to motivate his basketball team this year despite the fact that the Huskies face a postseason ban. Due to their subpar Academic Progress Rate scores, the three-time national champion Huskies won’t play in the Big East Tournament, the NCAA Tournament or even the NIT. But Calhoun, always defiant, says he can still motivate his kids to play hard. “No, no I don’t think at all [it will be an issue],” Calhoun, 70, told SNY.tv at the Peach Jam, where he was recruiting prospects like Chris McCullough, a 2014 forward from New York. “I think that last year we had motivation from talented kids and I don’t think we always played as well as we could’ve.” Despite the struggles of last year, those players at least got to compete in the Big East and NCAA Tournaments. That won’t be the case this year. “We don’t talk about going to the NCAA or winning a national championship the first day of practice,” Calhoun said. “As it plays its way through we certainly make references to that. “Our theory has been over the years, be the best team you can be and we’re going to try to do the same thing this year. And the fact that we don’t have an opportunity to compete, we’ve missed [the NCAAs] a few times in 25 years and this year we just kind of know we’re going to miss it but the season’s the season. The kids get a great deal out of it personally.” Calhoun does wish the Big East Conference had made an allowance to let the Huskies play in the conference tournament. Instead, this year’s tournament at Madison Square Garden will feature 14 teams after West Virginia left for the Big 12 and UConn faces the ban. “Yeah, I do,” he said. “Nothing you can do about it but the NCAA situation is the NCAA situation. If they discover the grades within a year’s period of time [UConn’s future could change]. I hope in this age of computers we’ll be able to actually do that.” He pointed to the Nov. 9 game against Michigan State at an overseas military base — potentially Ramstein Air Base in Germany — as an exciting moment for his kids. As far as his own plans, Calhoun reiterated that he has two years left on his contract. “I have two years left on my contract and if I decide not to fulfull it I’ll be more than happy to tell everybody that,” he said. “I can’t think of anything that I’ve done differently than I have in years past and we’re in the July recruiting period, talking to our kids coming back on our campus. “Nothing has changed.” UConn lost forwards Alex Oriakhi (Missouri), Roscoe Smith (UNLV) and Michael Bradley (JUCO) to transfers, while big man Andre Drummond and wing Jeremy Lamb went to the NBA. In their absence, Calhoun is counting on big things from the holdovers. “I would think that Shabazz [Napier] would have a big year,” Calhoun said. “I think Ryan Boatright could be one of the better scoring guards in the league. “I have a lot of confidence that DeAndre Daniels, who got a lot stronger, will be much better. Tyler Olander is going to have a very good year for us. “The kid Phil Nolan who we got from Milwaukee has been playing great in our summer league in Hartford.” Calhoun said he also expects incoming shooting guard Omar Calhoun (no relation) of Christ the King to contribute right away. “He’s more than ready,” Calhoun said. “He can score. He can score and he’s mature. He’s a real mature kid in every aspect.” This year will be the last for Syracuse and Pitt in the Big East, but Calhoun isn’t shedding any tears. “The day that I came with nine schools 26 years ago [the league had] Rollie Massimino, Rick Pitino, John [Thompson], Louie Carnesecca, etc. Once we started getting too much bigger, it’s never been the same. “That’s was different so right now I  think of it like the NFL. Line ’em up , play ’em, win as many game as you can.” And would Calhoun like to see UConn follow Syracuse and Pitt out the door to the ACC?
“Whatever league we’re in,” he said, “I’d like to see us do well.”