Aaron Gordon Has a Top Three 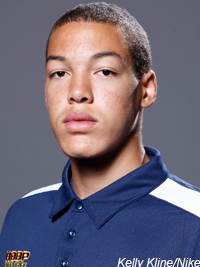 NORTH AUGUSTA, S.C. — Aaron Gordon is banged up but he and the Oakland Soldiers are into the Peach Jam semis. Battling injuries to his hip and left toe, Gordon was limited to 6 points and 12 rebounds as the Soliders downed Tyus Jones (28 points) and Howard Pulley, 68-66, in the quarterfinals here Saturday night. The Soldiers will play CP3 in one semifinal here Saturday, while Mokan will play CIA Bounce in the other. After the game, Gordon told SNY.tv that while he doesn’t have a definitive list, he likes Washington, Arizona and Kentucky as his top options. “Yes, that’s probably how it would go,” Gordon told SNY.tv following the game. “It’s all wide open right now, but that [order] would be the closest.” Washington coach Lorenzo Romar, Arizona coach Sean Miller and Kentucky coach John Calipari all sat courtside. “Washington’s a really good school,” Gordon said. “I love Romar. I also like Calipari a lot. I like Sean Miller. I like all those guys. There’s no really No. 1. Those are very close to my top three. “Washington’s probably up there, but there’s really no No. 1.” Gordon also said he likes Oregon, New Mexico, Stanford and Kansas. A high-flying 6-foot-9 small forward out of San Jose Mitty, Gordon added a hip injury Friday to go with the fractured toe that shelved him for nearly seven weeks. He had an ice pack wrapped around his hip after the game. “I mean, it’s tough, man,” he said. “I thought I was going to be able to lead my team, but it looks like I’m getting a little bit more hurt and hurt every game. “I pulled a muscle in my hip…It’s impossible to move. I’ve been icing it, but it’s just tough because I have no explosion. People just push on me, I can’t really push on them back just because I have that constant pain running up and down the floor.” Hopefully, with a night’s rest and some ice, he can come out strong for Sunday’s semis. “I try, man,” he said. “I try.”