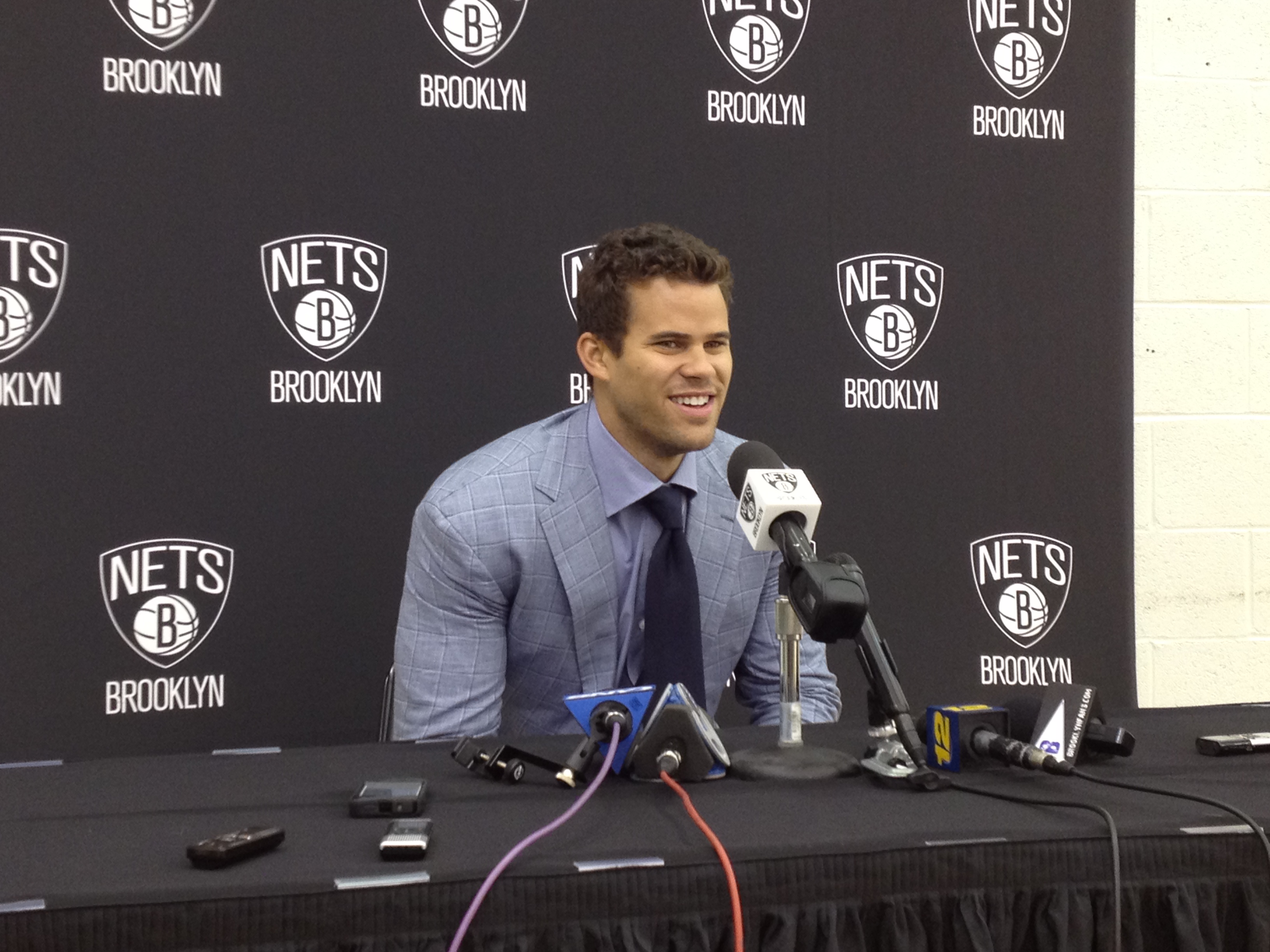 EAST RUTHERFORD, N.J. – Newly re-signed free agent power forward Kris Humphries was re-introduced by the Brooklyn Nets on Thursday morning at the PNY Center, and he was apparently in the mood to reminisce. Humphries has been through some tough times with the Nets, namely the second half of the infamous 12-70 season in 2009-10. He played the last two seasons at the Prudential Center in front of a largely-apathetic fan base as the team prepared to move to Brooklyn. However, in his time with the then-New Jersey Nets, his game has taken off under head coach Avery Johnson. A free agent in position for the first time to truly cash in, the 6-foot-9 former lottery pick wasn’t about to bail on the organization that got him to this point. “I was with the team before they went to Newark, I was with the team when they started talking about (owner Mikhail) Prokhorov taking over and going to Brooklyn and when they broke ground,” said Humphries, who re-upped for two years and $24 million. “I’m excited to actually go in there and play and get it going. I go from getting traded to the Nets, having that tough year (in 2009-10) and the next year, coach Avery Johnson comes in, (General Manager) Billy King and me finding my way through all that.” Humphries definitely found his way through those obstacles and it may not have made it him a household basketball name outside the tri-state area, but he is unquestionably one of the most effective power forwards in the NBA right now. He was traded to the Nets along with Shawne Williams from the Dallas Mavericks in exchange for Eduardo Najera in the middle of that forgettable 2009-10 season. The next season, he had his best output as a pro, averaging 10.0 and 10.4 rebounds per game. Coming off that landmark season, the lockout came and with it, uncertainty. Humphries agreed to more uncertainty when re-signed with the Nets for one year and $8 million just days before the truncated, 66-game season began. The result was another career-year in 2011-12 with averages of 13.8 points and 11.0 rebounds per game. With two straight seasons of double-doubles to his credit, Humphries had options this summer. The Nets had reportedly floated Humphries’ name out there in Dwight Howard sign-and-trade scenarios, but then offered three years and $24 million. The Charlotte Bobcats were also reportedly in the mix with a three-year, $22 million offer. “I’ve been here for a while and Avery, I wouldn’t be where I’m at right now without him,” Humphries said. “He really gave me an opportunity, worked with me, developed me and he’s a great coach. I’ve learned a lot with him. I’ve always said to have been in the league for five, six years and then make that kind of jump, it’s a credit to the coaching staff and the guys that work with me everyday.” The re-signing of Humphries represents the last major roster move for King as he has basically put together a roster from scratch. Since the free agency moratorium ended on July 11, King has either signed or re-signed Humphries, Deron Williams, Brook Lopez, Keith Bogans, Jerry Stackhouse, Tyshawn Taylor, Mirza Teletovic, Gerald Wallace and C.J. Watson. Additionally in that time, King has acquired Joe Johnson and Reggie Evans in separate sign-and-trade deals. Bogans is Back The Nets announced on Wednesday that they re-signed Bogans, a free agent shooting guard. The former University of Kentucky star signed with the Nets on Feb. 1, played five games and then tore a deltoid ligament on Feb. 8. He was waived by the Nets on Feb. 14. Bogans’ contract is reportedly for the veteran’s minimum of $1.3 million for one year. Follow Josh Newman on Twitter