Josiah Turner Going Pro Instead of Transferring to SMU 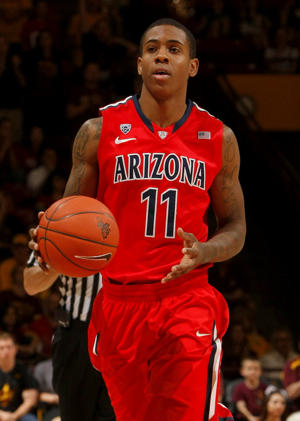 Troubled former Arizona point guard Josiah Turner is turning pro instead of transferring to SMU and debuting in the Big East during the 2013-14 season. Turner told Yahoo! Sports that he will either join the NBA D-League or head overseas. “I had to step back and reevaluate what my main goal and my dream was,” Turner told the Website. “My dream is to be a professional athlete in the NBA and I think this is what’s going to bring me closer to it. In college, you get your degree and everything, but going pro is getting me closer to my dream and what I want to do in life.” Turner was suspended multiple times by Arizona coach Sean Miller and was then arrested on an “extreme DUI” shortly before transferring from Arizona to SMU in April. But SMU coach Larry Brown declined specific comment during an interview last month with SNY.tv. “I don’t really want to comment on anybody but the thing you really try and do, though, is just get kids who can play,” Brown said then. “High-character kids and kids who want to be coached. I’ve coached every kind…Kids make mistakes and we just gotta figure out which ones want to be coached and want to do the right thing. We’re going to try hard to identify those kind of kids.” Without Turner in 2013, Kansas State transfer Nick Russell, who sat out last season, and Illinois State transfer Nic Moore, who will sit out this season, are expected to run the point, sources told SNY.tv. Turner said Brown handled the news well. “He actually thought it was a better move for me to go,” Turner said. “He respected my decision. It’s my dream.” Turner told Yahoo! that alcohol and marijuana use were “big issues” for him during his year at Arizona, but claims he has matured. “My maturity level now is way higher than it was when I was in Arizona,” Turner said. “I was young. I made mistakes. I just learned a lot from last year thinking about where I could be at right now and thinking about the things I did last year. It was all stupid.” Turner, who nearly landed at St. John’s when he opted to transfer, said he hopes to have a fresh start in the pros. “I just can’t wait to show everyone that I’m a new person and that my maturity level is higher,” he said. “I lost a lot of fans, a lot of younger people that looked up to me. I want to earn them all back and take advantage of the new start. Photo: US Presswire

After 'Humbling & Humiliating' Few Months, Caracter Hoping to Make it Back to the NBA