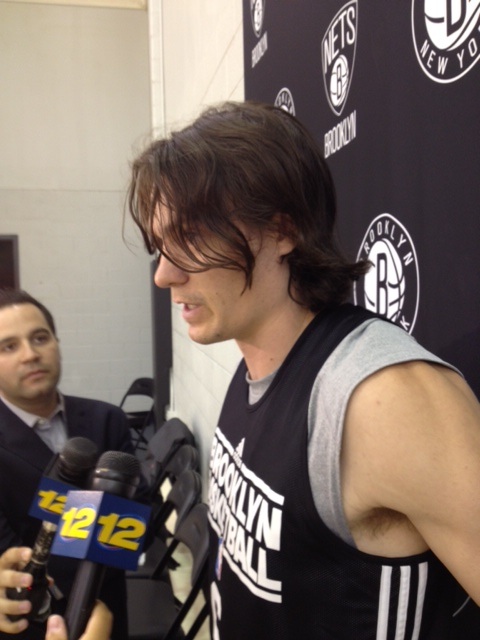 EAST RUTHERFORD, N.J. – The stigma of being an NBA Draft bust is something that Adam Morrison is never going to be able to shake. The No. 3 overall pick of the Charlotte Bobcats in 2006, Morrison had a solid rookie year in Charlotte, but then came a downward spiral. A serious knee injury, a trade to the Los Angeles Lakers, getting cut by the Washington Wizards and a stint last season in Turkey has brought the former Gonzaga star to right now and a spot on the Brooklyn Nets’ summer league roster. So with this opportunity with the Nets representing his last shot at getting back to the league, Morrison has something to prove to people, right? “Nothing,” Morrison said on Friday afternoon when asked if he had something to prove to everyone. “I just want to be able to be on an NBA team again. Everybody says whatever they want about me. I only have to prove it to myself I guess.” A 6-foot-8 small forward who owns two championship rings from his days as a Laker, Morrison is on the Nets’ roster that will compete in the Orlando Summer League next week after a solid showing at the team’s free agent mini-camp in late May. He has cut his shoulder-length locks somewhat since May, although he’s still rocking the long hair. As with most other players across the league, the summer league scene is a chance to make an impression and gives organizations something to think about. In Morrison’s case, at the very least, he is a veteran guy that already has NBA experience. Those attributes are buoyed by the fact he has a strong desire to get back to the game’s highest level. “Score the basketball, and boy can he score in a variety of ways,” Nets head coach Avery Johnson said. “He makes 3’s, he scores when the shot clock is going down, he knows where to be on the floor. What I’m most impressed with is he has taken the challenge much more defensively. He’s much more competitive defensively in this camp than in our earlier free agent camp.” Also working in Morrison’s favor is the fact that Johnson has a history of giving guys chances in this type of setting. Johnson was quick to point before the team’s first practice on Thursday evening that J.J. Barea and Brandon Bass were two players that eventually found their way onto the Dallas Mavericks’ regular season roster via summer league. For his career, Morrison has averaged 7.8 points in 161 games across three seasons for the Bobcats and Lakers. Last season with Turkish club Besiktas Milangaz, he averaged 11.8 points per game over eight contests. He also put up 15.5 points per game over eight contests for Crvena of the Adriatic League. “My agent [Mark Bartelstein] said this would be a good spot,” Morrison said. “They give guys chances and that’s all I’m looking for.” Follow Josh Newman on Twitter And like ZAGS on Facebook

Jones Leads US U17s Into Semifinals