Iona’s Machado Works Out for Knicks 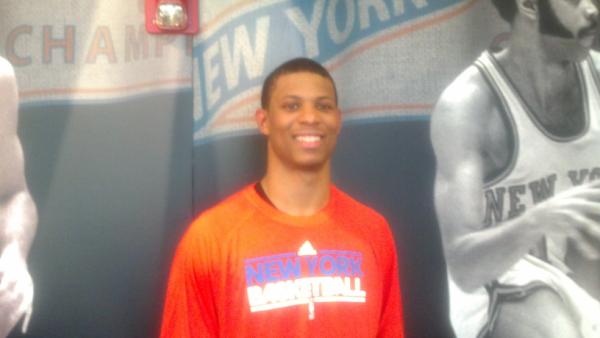 GREENBURGH, N.Y. — Scott Machado has played five games at Madison Square Garden during his career. A Queens kid who led Iona to the NCAA Tournament this past season, Machado loves the idea of potentially playing permanently at the Garden. “Everybody loves to play at the Garden, it just brings a whole different energy out of you,” Machado said after working out Thursday morning for the Knicks, who own the No. 48 pick in the upcoming NBA Draft. In a closed workout that wasn’t open to the media, the 6-foot-1 Machado worked out in front of Knicks management, including coach Mike Woodson, who is expected to be announced as the team’s full-time coach sometime in the coming days. “It was amazing, amazing,” said Machado, who averaged 13.6 points and a Division 1-best 9.9 assists en route to winning the Haggery Award as the New York area’s top player. “I grew up watching the Knicks, so it’s a wonderful feeling just to be in the facility wearing the gear. Being able to work out for them is just a pleasure.” This was Machado’s fifth workout, following stops in Philadelphia, Boston, San Antonio and the Nets combine. He has future workouts with Washington and Golden State and will also attend the Chicago Pre-Draft Combine June 7-8. “Machado gets his teammates good shots,” one veteran NBA scout told SNY.tv after watching him play alongside 43 other NBA hopefuls at the Nets’ training center last weekend. Like Syracuse’s Scoop Jardine and Xavier’s Tu Holloway, who both worked out Wednesday, Machado is well aware of the depleted Knicks backcourt and the opportunities that presents. Jeremy Lin, Baron Davis and Iman Shumpert were all lost to injuries during the playoffs, and the Knicks are actively seeking help at the point guard spot going forward. “I feel like for any point guard who wants to play here, it’s a good opportunity,” Machado said. “They got some players that are banged up, hurt, or some players that are retiring or old. I really don’t know what they’re going to do….So it’s a wonderful opportunity for the players that want to come in here.” Machado said he was inspired by what Lin accomplished during the “Linsanity” period before he went down with the knee injury. “It does inspire me,” he said. “He went to what, two different teams before he landed here. And just the opportunity that he got. This league is full of opportunities and once you get that opportunity to show your skills, you gotta take advantage.”