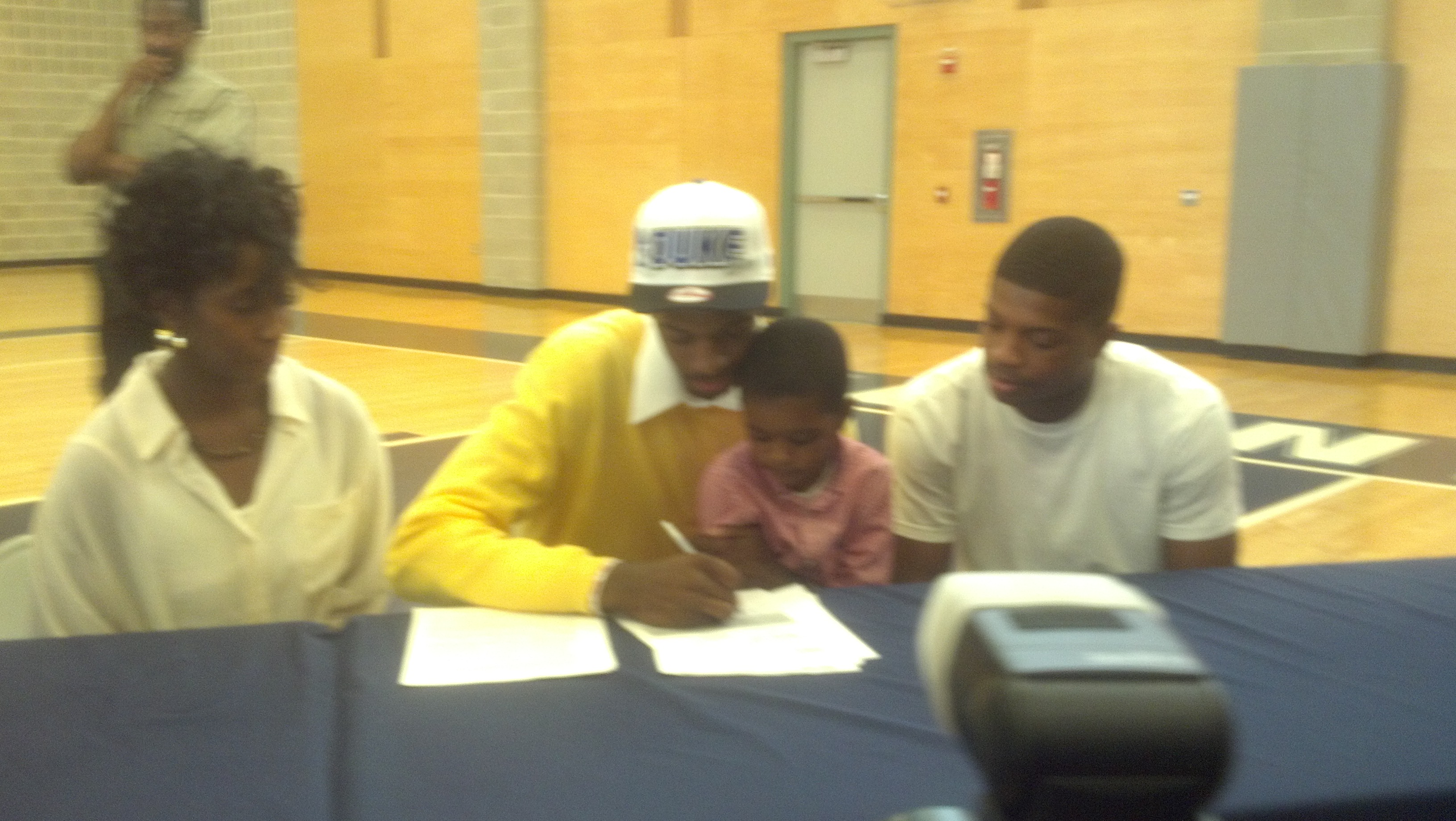 PHILLY — Amile Jefferson kept his college decision a secret from virtually everybody up until the time he announced Tuesday afternoon in the gym at Philadelphia Friends’ Central. Even his mother. “No, he wouldn’t tell me,” Quetta Jefferson told SNY.tv with a smile. “I asked him, he wouldn’t tell me.” In the end, Jefferson pulled the trigger for Duke over N.C. State, Villanova, Kentucky and Ohio State. He called the coaches from the other schools five minutes before announcing. “When I sat down and talked to my family and we weighed out everything, Duke just seemed like the right fit,” he said after slipping on a Duke hat. The 6-foot-8 Jefferson said he didn’t fully decide until about two day sago. His father, Malcolm Musgrove, who played at Delaware State, said N.C. State was the leader until Duke became involved in January. “I would say that N.C. State was the frontrunner prior to Duke University coming back into the fold,” Musgrove said. Once Coach Mike Krzyzewski began recruiting Jefferson, the whole paradigm shifted. “Duke having that strong academic tradition along with a great athletic program and him having the ability to have both in one school was really appealing to him,” Musgrove said. “He knows it’s going to be challenging academically, he knows it’s going to be challenging on the court. But I believe he’s up for it and prepared for it.” During his career at Friends’ Central, Jefferson finished with 1,569 points (averaged 14 ppg), 839 rebounds (7.5 rpg) and 189 blocks (1.7 bpg). During his four-year career with the Phoenix, the team captured four Pennsylvania Independent Schools Tournament championships as well as two Friends’ School League titles, while posting a 98-14 won-loss mark. Jefferson seemed especially impressed with Coach K and praised him many times during the presser. “It’s a place where I can see myself playing for Coach K and they value academics just as much as they do athletics,” he said. He added: “Coach K brings an energy to our team that I want to bring back to him. When he looks in my eyes I want him to see the energy that I see in his eyes.” Playing time at the small forward and wing position was also a factor. “Right now I don’t think they have a player at my position,” he said. “I don’t think they have a guy like me and I hope to bring energy and passion to the whole university.” Friends’ Central coach Jason Polykoff said the Duke staff sees similarities between Jefferson and former Duke star Shane Battier, now with the Miami Heat. “He’s going to add that piece, that Shane Battier, that Luol Deng piece that they’ve had that’s made them successful,” Polykoff said. “He’s diverse and he’s multi-talented,” the coach added. “I think he’s going to add that element of putting that ball on the ground along with being able to put his back to the basket that. Although they had a great team this past season, they didn’t really have that piece.” Said Musgrove: “We believe that Amile has a lot of work to do to become a Shane Battier, but he’s a very versatile player. Not your traditional four, not your traditional three, but somewhat of a hybrid of the two. “And that’s where we believe the game is moving, bigs who have the ability to put the ball on the floor, who have perimeter skills and can defend multiple positions and we believe that’s Amile.” Jefferson joins Houston Strake shooting guard Rasheed Sulaimon in Duke’s 2012 recruiting class. The Blue Devils missed out on Shabazz Muhammad and Tony Parker, both of whom picked UCLA. The Devils also add redshirt bigs Alex Murphy and Marshall Plumlee. “We’ll be a little bit bigger, we’ll be longer, we’ll be more athletic,” Jefferson said. “Bringing in Rasheed Sulaimon, a great guard from Houston, will help us run more, get up and down.” “I believe that if Amile goes in in July and really works hard, he’ll have an opportunity to play right away,” Musgrove said. “Sulaimon is a friend of Amile’s a great player in his own right. “They have two redshirt freshmen that Amile spent a lot of time playing against in Alex Murphy and the youngest Plumlee brother. When you look at that core of kids coming in as freshmen coming in, you’re talking four years of really good players.”