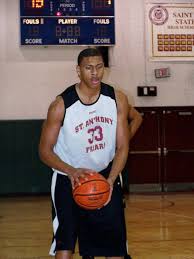 St. Anthony power forward Jerome Frink has committed to new Florida International coach Richard Pitino, his mother confirmed to SNY.tv. “He came in and said he was ready to commit,” Ingrid Frink said. The 6-foot-7 Frink also considered Hofstra, Quinnipiac, Iona and St. Bonaventure. “He had great schools so he couldn’t go wrong,” his mother said. Frink was a rugged rebounder and interior scorer alongside UCLA-bound Kyle Anderson on a St. Anthony team that won back-to-back New Jersey Tournament of Champions titles and went 65-0 over the past two seasons. He averaged 16.2 points and 6.5 rebounds in six state tournament games.