SNY.tv Exclusive: Pitino's UMass Check for Calipari Got Him in Hot Water With The Wife | Zagsblog
Follow @adamzagoria

SNY.tv Exclusive: Pitino’s UMass Check for Calipari Got Him in Hot Water With The Wife 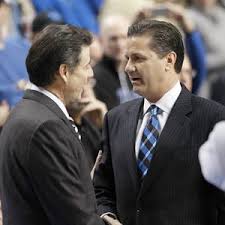 NEW ORLEANS — The check Rick Pitino wrote on John Calipari’s behalf back in 1988 got him in hot water with his wife because he couldn’t pay her Saks Fifth Avenue bill. Elaborating on a story he has told in the past, Pitino told SNY.tv that he wrote a check for $5,000 or $10,000 to help cover Calipari’s expenses when he was hired at UMass in 1988. “John doesn’t know this but I know it to be the truth,” Pitino told SNY.tv Thursday following his regular interview session with the media. As has been documented in a 2009 SI story, Pitino was on the search committee for a new UMass basketball coach at the time the school opted to hire Calipari, a 29-year-old Pittsburgh assistant. According to the SI story, UMass AD Frank McInerney offered Calipari a salary of $63,000 but the school only had $58,000 to pay him. “I was walking out [of UMass] and the AD said, ‘Look, I don’t have money to pay for a courtesy car or [Calipari’s] country club,'” Pitino recounted to SNY.tv. “‘Can you write us a check?'” “I’ll send it to you,” Pitino recalled telling McInerney. “No, can you write the check?” he recalled McInerney replying. Asked how much the check was for, Pitino said, “I’m not sure the amount. It was either $5 or 10 [thousand]. But I’m not sure the amount. I know I wrote the check.” Pitino wrote the check instead of covering his wife Joanne’s Sak’s Fifth Avenue bill, as was his habit during his tenure as Knicks head coach from 1987-89 When Pitino got home, Joanne told him he had to pay the bill. “I can’t pay it,” Pitino told her. “I just wrote a check. And she called me every name in the book. So that’s why I know it was true. He never knew it.” When asked by SI in March 2011 about it, Calipari told the magazine: “I would just tell you: I respect him, respect what he’s done over his career.” Then, SI reported, “he yells in a voice thick with sarcasm, ‘And thank him for all the help he’s given me over my career!'” The rivalry between the two men heated up during their time together in Conference USA and they crossed swords in several recruiting battles. “Not until Memphis [when Calipari became coach there and Pitino was at Louisville] did our [coaching] paths cross,” Pitino said. “Then a competitiveness became part of life. At Kentucky, it is the same thing.” Pitino has won one national championship — at Kentucky — while Calipari is seeking his first and has had two Final Fours vacated, at UMass and Memphis. Now, all the pressure is on Calipari and Kentucky in this national semifinal game because they are the overwhelming favorite. Asked about the concept of Louisville playing with house money, Pitino quipped, “Lets quit now and go home with the money.’ Calipari is downplaying the rivalry between the two men — and the two schools — as much as possible. “The thing with us at this time of the year, rivalries do not matter,” Calipari said here Thursday. “[For] fans it matters. But it does not matter. You’re playing a basketball game and whether the school is 15 miles away from you or 1,000 miles away, you’re trying to advance. We’re playing a basketball game.” Calipari suggested that playing up the rivalry nature of the game would lead to anger and perhaps, fear, which he did not want. “Now if you play it as a rival game, ‘Let’s hate those guys, let’s be angry, let’s hate that coach,’ what that is physiology, [is] very close to fear. The physiology in your body, hatred and fear are really close. “We respect them. They are playing great right now. They are playing as well as anyone in the country and we know it. We know they’re close to us but it didn’t matter who we’re playing.” Pitino was a little more forthright about the current state of the relationship between the two stubborn, Italian-American coaches. “There’s no animosity. It’s just we’re competitors and we want to win and we want to beat each other out for recruits,” Pitino said. “And that’s the truth. Now you can write whatever else you want to write. But that’s the truth. The truth speaks for itself.” *** HERE’S PITINO ON THE LOUISVILLE/KENTUCKY RIVALRY AND HOW RACE HAS FACTORED IN: “People always ask me what the best rivalry is. Purists will say it’s North Carolina-Duke because they are in the same league. “You all watched Glory Road. It all started with the racial lines in Louisville. We are the minority university. They [Kentucky] are the university of the privileged so to speak. That’s where the rivalry really started. It was thrown out the window when Tubby Smith became the first African-American coach. The hatred wasn’t based on race any longer. That was over. I did everything humanly possible to recruit Louisville to end those lines because I didn’t like it. The lines are no longer racially motivated. It’s just pure hatred.”