Sidney Turns Pro, But Who Will Draft Him? | Zagsblog
Follow @adamzagoria

Sidney Turns Pro, But Who Will Draft Him? 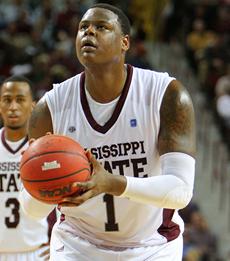 Enigmatic Mississippi State forward Renardo Sidney has signed with an agent and will declare for the NBA draft. But who will take him? “I would think [he would get chosen] at some point in the second round but his stock is really low,” one NBA scout told SNY.tv. “He needs to get to the Chicago Pre-Draft camp somehow.” When asked if Sidney will get drafted, a second NBA scout said flatly, “No.” The 6-foot-10 junior from Jackson, Miss., averaged 11.5 points and 6.1 rebounds per game over two seasons with the Bulldogs. He battled eligibility problems early in his career, and has also faced weight and discipline issues, including a highly-publicized fight with a teammate in the stands during a tournament in Hawaii. In a statement from the school, Sidney said he appreciates “Mississippi State giving me an opportunity to play,” but wants to follow his “dream of playing in the NBA.” Sidney averaged 14.2 points and 7.6 points during his sophomore season, but his production dipped as a junior. He averaged 9.7 points and 5.2 rebounds per game last year, helping the Bulldogs to a 21-12 record. (The AP contributed)