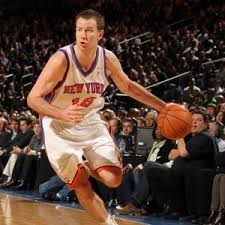 NEW YORK –– In the coming days and weeks, Knicks coach Mike D’Antoni will face a delicate balancing act. With the returns from injury of Carmelo Anthony, Baron Davis and Josh Harrellson, combined with the addition of J.R. Smith, D’Antoni may now have 10 or 11 guys who require playing time. One of them is former Marquette standout Steve Novak, who helped himself — and the team — big-time on Sunday by scoring all 14 of his points in the fourth quarter of a 104-97 victory over the defending NBA champion Dallas Mavericks at Madison Square Garden. “He’s gotta play somewhere,” D’Antoni said of Novak. “Everybody will play some. He gets hot like that, he’ll play more.” Novak keyed a game-turning 12-1 run that turned an 80-78 deficit into a 90-81 advantage by draining three consecutive 3-pointers. Jeremy Lin hit a fourth 3 over Dirk Nowitzki for the Knicks’ fourth straight from beyond the arc. “He’s playing great,” D’Antoni said of Novak. “He’s a shooter. Novak has now reached double figures in five of the Knicks’ last eight games — which coincides with the rise of Linsanity. He is averaging 7.0 points per game and shooting 45 percent from beyond the arc in 15 minutes per game. Novak credits Lin, whom Jason Kidd compared to Steve Nash, for opening up the offense for everyone else to succeed. “I know that he’s turned the ball over a bit, but he’s being creative, trying to find the big guys, trying to find the perimeter guys,” Novak said. “He continued to find guys and I think that was huge.” And as long as Novak makes shots, D’Antoni must continue to carve out playing time for him even as he integrates Anthony, Smith, Davis and Harrellson into the linup. And for Knicks fans, that could be huge. Photo: NY Post