Add Smart to the List of Coaches Who Passed on Lin 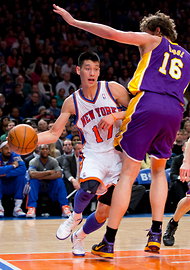 NEW YORK — Before his Sacramento Kings played the Knicks at Madison Square Garden Wednesday night, head coach Keith Smart got a few texts about  — who else? — Jeremy Lin. From his friends in the Philippines. “This guy just showed up and just transcended the world,” Smart said before he Knicks won their seventh straight, 100-85, behind Lin’s 10 points and 13 assists. “I mean, this guy is all around the world. I have friends that are in the Philippines texting me about Jeremy Lin, you know? “You can’t explain it.” Smart was the head coach with the Golden State Warriors last season when Lin averaged 2.6 points in 29 games in between stints in the NBA D-League. Lin was initially signed by Golden State on July 21, 2010 and was waived by the Warriors Dec. 9. He was then waived by Houston Dec. 25 before the Knicks picked him up Dec. 27. While Lin was in Golden State, Smart said he recalled having breakfast in his office and looking out to see the Harvard graduate working on his shot during the morning. Yet Smart was one of many coaches — college and pro — who passed on Lin and he has no regrets. “Everyone said, ‘Well, you should’ve played him more,'” Smart said. “Well, you had Monta Ellis, a top five NBA scorer, Steph Curry, a runner-up for Rookie of the Year. You had Acie Law and Reggie Williams and you had a young, undrafted guy who didn’t know how to play in the NBA yet.” Smart says Lin fell into a perfect storm with the Knicks, who desperately needed a competent point guard because of the injury to Baron Davis and the ineffective play of Toney Douglas. “He fell into a spot now where he’s a starter,” Smart said, “and he knows how many minutes he’s going to play each night, barring foul trouble. He knows the shots he takes, he doesn’t have to look over his shoulder. It’s just perfect for this young man, just absolutely perfect.” Lin becomes a restricted free agent after the season and the Knicks will have the opportunity to match any offer for him. Which is a good thing for them. “Now let’s say now,” Smart said, “Jeremy Lin is available now, you would have everyone knocking on the door.” **For Notes, Quotes and Video on the game from my NBA.com notebook, click here. Photo: Richard Perry/ New York Times

What If Knicks Become More Dangerous When Melo Returns?