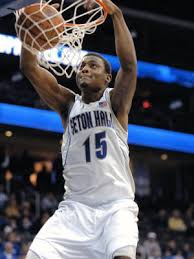 NEWARK — Seton Hall hasn’t made the NCAA Tournament since 2006. Pittsburgh is one of three teams — along with Kansas and Gonzaga — to win more than 20 games overall, capture 10 league games and appear in the Big Dance 10 straight years. Now, with Seton Hall’s 73-66 victory over the Panthers Sunday at The Prudential Center, the Pirates (17-8, 6-7 Big East) have simultaneously helped their NCAA resume while severely injuring Pitt’s. “”They’re still hanging on the edge but I would say the right side of things for the moment,” bracketologist Jerry Palm of CollegeRPI.com told SNY.tv in reference to Seton Hall. “They gotta keep going.” Herb Pope scored the game’s final six points to give him 19 for the game and freshman Aaron Cosby  scored a career-high 19 to give the Pirates their second straight win after they had lost six in a row. Jordan Theodore added 15 points and nine assists. Seton Hall hosts St. John’s Tuesday and then has two more chances at signature wins — at Cincinnati (Feb. 18) and home for No. 12 Georgetown (Feb. 21.). “It keeps us alive,” head coach Kevin Willard said of the win. “We don’t have an easy schedule the rest of the way, that’s for sure. But it keeps us alive.’ “They’ve been near the bottom of my bracket,” Palm added. “I would imagine they wouldn’t fall out because of that [win over Pitt]. They have to avoid bad losses and try to pick up some good wins along the way.” Pitt, meantime, blew a six-point lead late in the second half and is in serious jeopardy of missing the Big Dance for the first time in 10 years after falling to 15-11, 4-9. “We put ourselves in a position where we have to play at a high, high level and not let anything get away and this one got away from us,” Pitt coach Jamie Dixon said. The Panthers had won four of five coming in since the return of point guard Tray Woodall revitalized the team. Now, despite a game-high 26 points from New Jersey native Ashton Gibbs, the Panthers have dropped two straight. They would need to go 5-0 the rest of the way — including beating West Virginia at home and winning at Louisville and at UConn — just to get to 9-9 in the league. “Today would’ve been nice,” Palm said of Pitt. “They’ve got to pick up some good wins. They’re 15-11. They don’t have a lot of margin for error left.” FREE THROWS Seton Hall had 2013 commit Aquille Carr in the building, as well 2013 wing Rondae Jefferson and  2015 guard Malachi Richardson.