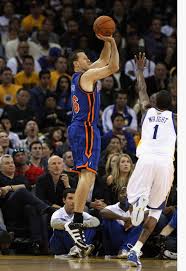 GREENBURGH, N.Y. — If you believe everything you read these days, Jeremy Lin is single-handedly responsible for the Knicks’ modest three-game winning streak. And Steve Novak will be the first to give Linsanity its just due. “Everyone’s been able to see how valuable [he is], the way he gets in the paint on offense and finds guys, how valuable that is,” Novak, whose team meets Kobe Bryant and the Lakers tonight at Madison Square Garden, said earlier this week at the Knicks training facility. Novak, perhaps more than any other Knick, has benefitted from Lin’s passing. The former Marquette standout has scored 19 points in each of his last two games — wins over Utah and at Washington — and is 10-for-17 from beyond the arc in those games. Of Lin’s 18 assists in the last two games, 10 have gone to Novak. “I think you’re really starting to see our offense come together when we have that kind of penetration and that kind of finding guys,” Novak said in crediting Lin, the second-year sensation from Harvard. “And it’s contagious because other guys know, ‘I’m going to get the ball from him or I’m going to make the next pass because the next time down he’s going to find me again.” The Knicks picked up the 6-foot-10 Novak — a 41.7 percent career 3-point shooter — in late December after he was released by the San Antonio Spurs But he never scored more than nine points in a game for the Knicks until this month, when both Amar’e Stoudemire (brother’s death) and Carmelo Anthony (groin) have been absent from the lineup. Both of those players will miss at least two more games. “At this point, I think we all know, you’re in the NBA for a reason,” Novak, 27, said of his back-to-back 19-point games. “Everybody can play. Anybody can have a huge game.” Novak played four years at Marquette for former coach Tom Crean and was drafted in the second round of the 2006 NBA Draft by the Houston Rockets. Even after bouncing around the NBA and the D-League, Novak remains close to his Marquette roots and current coach Buzz Williams. “I work out there all summer,” he said. “I live five minutes from Marquette and play five-on-five with those guys and stay in touch. It’s definitely still my family.” During those summer workouts, Novak sometimes goes up against the famous Marquette product of all time, Dwyane Wade, as well as fellow NBA players Jimmy Butler, Wesley Matthews and Lazar Hayward.  “Whenever you go to a school and you have those bonds with your teammates, it’s special,” he said. “But then to carry it over to another league it’s pretty fun. “And obviously, Dwyane has kind of paved the way for everybody and he’s done a great job and made a great name for Marquette. And there’s been quite a few guys after.” One of them is Novak, who appears to have been swallowed up by Linsanity.