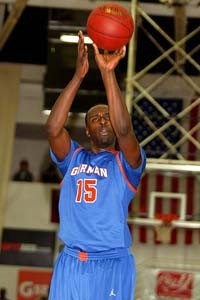 Kentucky coach John Calipari is in Las Vegas tonight (Wednesday) to watch Shabazz Muhammad, the No. 1 overall prospect in the Class of 2012, and 6-7 forward Anthony Bennett. Muhammad and Bishop Gorman take on Western High School in a game. Bennett and Findlay Prep have no game listed on their schedule, so Calipari will presumably watch a practice. Ron Holmes, Muhammad’s father, confirmed to SNY.tv that Calipari “said he was coming to our game tonight.” Earlier, Calipari Tweeted, “Getting some recruiting done today. Anybody know what state I’m in?” The 6-foot-6 Muhammad is Kentucky’s primary target for the spring signing period, but they are also involved with Bennett, Devonta Pollard, Amile Jefferson and Tony Parker.  Asked last month by FiveStarBasketball.com what it would mean for Kentucky to land both Muhammad and Bennett out of Vegas, Findlay Prep coach Michael Peck said: “Oh my God, amazing. It would be tremendous because they play different positions but both are physically ready for that next level. I mean, you look at both, their size and their physical makeup, and they’re explosive athletes. A lot of guys that go to the next step have to get more time in the weight room and develop their bodies. These guys, their bodies are ready. They’ll continue to get stronger but they’re both ready for that next step.” “The interest level in Kentucky is high,” Muhammad told reporters last month at the Hoophall Classic in Springfield, Mass. “Coach Cal was there [at the Hoophall]. I talked to him a week ago. Their style of play, I just think I fit really well in their style of play and they’re just a great program.” Holmes said he spoke with the Kentucky coaching staff Tuesday, but added that he’s also spoken this week with coaches from Duke, Arizona, Kansas, USC, UCLA and UNLV. Muhammad has already taken officials to Texas A&M and Kentucky and will likely take his three remaining officials to Duke, Arizona and Kansas. No dates have been set for Arizona or Kansas visits, Holmes told SNY.tv Wednesday. Muhammad will trip to Duke March 1 for the North Carolina game. Muhammad has said he will likely take unofficials to UNLV and UCLA because of their close proximity to his home in Las Vegas. Photo: ESPN.com