The last time Fordham beat a Top 25 opponent, Jimmy Carter was president, gas was about 67 cents a gallon and Andy Gibb’s “(Love Is) Thicker Than Water” was the No. 1 record.

The Fordham win snapped a 54-game losing streak to ranked opponents stretching back to February 28, 1978 when the Rams knocked off then 18th-ranked Georgetown, 63-59, at Rose Hill.

The win followed a Dec. 29 victory over Georgia Tech and was Fordham’s third in a row and fourth in its last five games. Fordham is now 7-6.

NEWARK — Seton Hall coach Kevin Willard had just beaten defending NCAA champion UConn Tuesday night and that’s not even what made him the happiest.

“We had Victor Cruz in the locker room,” Willard said after the Pirates snapped an 11-game losing streak against UConn by downing the No. 8 Huskies, 75-63, at The Prudential Center.

“Everybody says, ‘You gotta be happy about this one,’ I just met Victor Cruz. I’m more happy about that than anything. Got my Giants back in the playoffs, I’m all excited.”

NEWARK — Before his team took the floor against No. 8 UConn Tuesday night at The Prudential Center, Seton Hall coach Kevin Willard had a few choice words for his team.

“He just really said that, ‘I’m not going to let anybody talk about my players, so we better come out here and we better take care of home court and get this victory,’ and that’s pretty much it,” Pirates senior point guard Jordan Theodore said after scoring all 19 of his points in the second half to go with 11 assists as Seton Hall beat UConn, 75-63, for the program’s first win against the Huskies since March 3, 2001, a stretch of 11 consecutive losses.

Willard — whose team is now a surprising 13-2 and should be ranked in the next Top 25 poll — is no fool.

I spent New Year's Eve at the

“I might reclass,” he told SNY.tv following St. Benedict’s 51-50 loss to St. Anthony Sunday in the New Year’s Jump Off at Hackensack High School. “I just turned 17. I [will] most likely do it. I probably will.”

The 6-foot-6 Richards, who transferred from Pocono Mountain East High in Swiftwater, Pa., could potentially spend next year at a prep school since St. Benedict’s doesn’t have a fifth-year team. 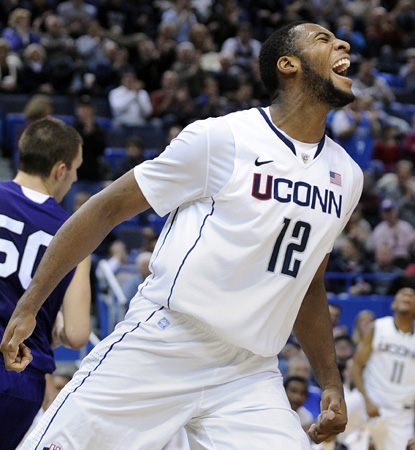 His team is 12-2 and getting ready to host defending national champion UConn Tuesday night at The Prudential Center (7 p.m., SNY).

But don’t ask 6-foot-11 UConn freshman Andre Drummond who Pope is because he apparently has no idea.

“I don’t even know who [Pope] is,” Drummond told Connecticut reporters after Monday’s practice. “I’m not trying to be disrespectful. They said the name to me in practice and I was like ‘Wait, who’s Herb Pope?'”