NEW YORK — Denver Nuggets forward Al Harrington hopes the Knicks turn things around because losers “suffer” the wrath of the media and fans in the Big Apple.

After scoring 22 of his 24 points in the second half of Saturday night’s 119-114 double-OT victory over the Knicks at Madison Square Garden, Harrington was asked what was wrong with his former team, losers of six straight.

“They don’t pay me to make those assumptions or figure those things out,” said Harrington, a former Elizabeth (N.J.) St. Patrick star. “I hope it works out for them, though, because Melo is like a brother to me.

“And I hate to see anybody suffer, especially in New York you can suffer if you don’t win, you know what I’m saying. So I hope they turn it around.”

NEW YORK — During the final seconds of the Knicks 119-114 double-overtime loss to the Denver Nuggets Saturday night at Madison Square Garden, groups of fans broke out in two sets of cheers.

“Fire D’Antoni” was one, and “Phil Jackson” the other.

Yet as much as some Knicks fans are ready for D’Antoni to be replaced by Jackson, the Zen Master says it won’t happen.

And then the former Knick proceeded to go out and hand Carmelo Anthony and his old team its sixth straight loss by pouring in a career-high 37 points in a 119-114 double-overtime victory that marked Denver’s fourth straight road win.

“[I wanted] to thank all the fans because that means that they remember all the good things I did for this team and for this franchise, so I have to thank them for the ovation,” said Gallinari, who scored nine points and went 7-for-7 from the line as the Nuggets outscored the Knicks 14-9 in the second overtime.

As if the Knicks didn't have enough

NEW YORK — St. John’s assistant coach Mike Dunlap wasn’t convinced that freshman guard D’Angelo Harrison had what it takes to be a leader when he first arrived on campus from Missouri City, Texas.

“He was pretty wild when he first game to us,” Dunlap said after the Johnnies lost an exciting Big East battle to Villanova, 79-76 in overtime, Saturday at MSG. “Sometimes it was misdirected passion in terms of just because he’s anxious and that, but that’s us learning how to work with him.”

Syracuse Is Without Melo, Loses Mookie 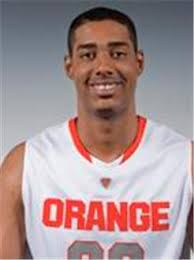 Syracuse issued a statement Saturday saying that sophomore center Fab Melo is not with the team on its current road trip, which includes games tonight at Notre Dame and at Cincinnati (Jan. 23).

Andy Katz of ESPN reported, per a source, that Melo is being held out because of an “unresolved academic issue from the first semester.”

If the one-and-done rule didn’t exist and