Parker, Poythress Closing in on Decisions

Tony Parker and Alex Poythress, two members of the Georgia Stars AAU program, are closing in on their college decisions, according to Stars coach Norm Parker.

“There’s one school out there for each one of them that is their preference,” Parker told SNY.tv by phone Monday, declining to specify the favored schools. “I’ve told them they’ve done a good job selecting the four or five schools that they visited.

“I’m as anxious as anyone else to see where they’re going.”

Haith faces allegations of impropriety stemming to his time at Miami.

“Actually, he’s been thinking about it for the last few weeks. It’s just a tough situation,” John Jordan, Scales’s high school coach, told the Columbia Daily Tribune. “He really likes Coach Haith. He’d love to play for him, but with these allegations pending, it’s a situation where we just can’t gamble on this kind of situation.”

Artis to Oregon; Allen to Stanford

Willie Cauley, the No. 6 center in the Class of 2012, has become the second player to commit to Kentucky in this recruiting class.

The 7-foot Cauley out of Olathe (Kansas) Northwest chose the Wildcats over Alabama, Florida and Kansas State.

“I just think that with the way they spread the floor and the way that they dribble-drive off the post or away from the post and don’t put their posts straight in the paint with their back to the basket is something that probably got him thinking a little bit about them,” Olathe head coach Mike Grove told SNY.tv by phone Monday morning.

“And their storied tradition. The tradition and history that Coach Cal has with his players as far as getting them prepared for the next level, the NBA level, I think those are the things that probably lured him or got him leaning towards Kentucky.” 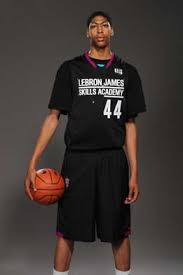 “With the first pick in the 2012 NBA Draft….the Minnesota Timberwolves select Anthony Davis of the University of Kentucky.”

Nothing is set in stone (obviously), but we all could hear those words emanating from the mouth of NBA Commissioner David Stern sometime next June.

If there’s no NBA season this year, what becomes of the NBA Draft? How will the order be determined? Who gets the No. 1 overall pick?

Those are the questions crossing more and more people’s minds after the league cancelled all games through the end of November.

If the NHL lockout of 2004-05 is any indication, the NBA could base its ping-pong ball setup on the previous three seasons results.

Dwaun Anderson, the 2011 Mr. Michigan Basketball winner, is the latest recruit to jump aboard the Dan Hurley express at Wagner.

Anderson, 6-foot-4 guard who averaged 20 points, 10 rebounds and 4.5 assists as a senior at Sutton’s Bay High School in Central Michigan, had enrolled at Michigan State, but will now enter Wagner as a non-scholarship student in January before going on scholarship next fall. He will have four years of eligibility.