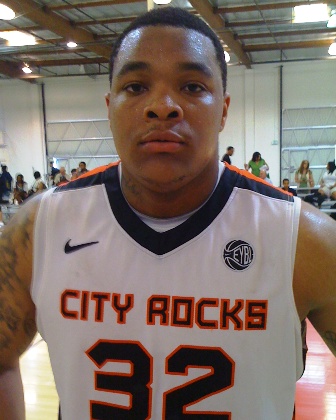 On the same night he locked up shooting guard Archie Goodwin with a verbal commitment, Kentucky coach John Calipari visited with 6-foot-9 big man DaJuan Coleman. “It was good,” Coleman told SNY.tv by text. “He was telling me about the past players he developed. And he said he liked the way I play and he can bring the best out of me because he knows I can do multiple things on the court. “It was a really good meeting.” Calipari has tracked Coleman for some time, even watching him the New York State Federation title game last spring. Coleman may postpone his official visit this weekend to Ohio State and will then visit Kentucky the weekend of Oct. 14 for Big Blue Madness. He is also considering Syracuse, but no visit date is set. “All three are pushing hard and the race looks fairly equal right now,” Albany City Rocks coach Jim Hart told SNY.tv. Goodwin was Kentucky’s first pledge from the Class of 2012. They missed out on 6-8 Kansas forward Perry Ellis Wednesday when he chose Kansas, but the Wildcats are also in the mix for a number of top players, including Shabazz Muhammad, Mitch McGary, Alex Poythress, Devonta Pollard and Willie Cauley.

Arizona Will Lean on Talented Freshmen