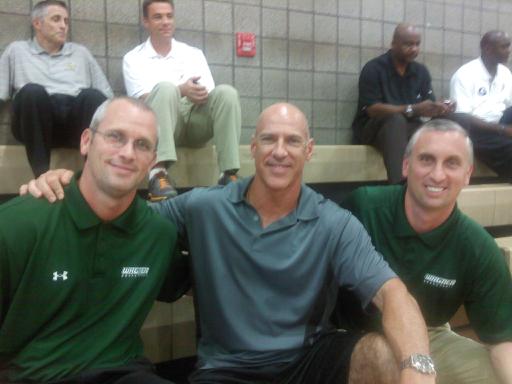 NEWARK, N.J. — It was an emotional couple of days for Dan and Bobby Hurley last week when they spent back-to-back days recruiting at North Jersey powerhouses St. Anthony and St. Benedict’s Prep. Wearing green Wagner shirts, the brothers spent Monday at St. Anthony, where they both played under their father, Naismith Hall of Fame coach Bob Hurley. A day later, they walked into the St. Benedict’s gym, where Dan spent nine years helping forge the Gray Bees into a perennial national high school power. “It was weird,” Dan told SNY.tv. “And for me to go back-to-back days, to go St. Anthony [Monday] and to come in [St. Benedict’s Tuesday]. I’ve got to put something on Twitter about how strange it is going to your old high school where you have all these memories, and then go back to the place that allowed you to regain your coaching career. “I mean, this place for me allowed me to be at Wagner right now. If Father Ed didn’t give me the opportunity to come here and build a special program, then I wouldn’t be a Division 1 head coach at Wagner.” During Hurley’s time at St. Ben’s, he coached a slew of future college and NBA players, including Tristan Thompson, Samardo Samuels, Myck Kabongo, Corey Stokes, Eugene Harvey, Lance Thomas and Aaron Brown. Now he’s looking to land some of the many talented players on Mark Taylor’s roster. Taylor is in his first year as the St. Ben’s coach and greeted the Hurleys with a smile and a hug. The Hurleys have already led a dramatic turnaround at Wagner, improving to a 13-win program last season from the five-win season that preceded their arrival. “I think we took the leap from a five-win program, one of the worst returning teams in the country, to somewhat respectable,” Hurley said. “I think we understand the jump from somewhat respectable to good is a tough leap but we feel we’ve recruited well enough now to do it.” The Seahawks return their top seven scorers from a year ago and are also blending in some strong talent. Hurley is especially high on 6-foot-6, 240-pound junior guard Jonathan Williams, a JUCO player from Richmond, Calif. “He’s been outstanding,” Hurley said of the City College of San Francisco product. “He can play one through four. He’s a high-impact guy for us.” Wagner also landed 6-8 French forward Hugo Naurais, the first commit for assistant coach Scott Smith. “He’s been the bigget surprise for us in terms of being better than we thought he would be,” Hurley said. Mario Moody is a 6-7 forward from East Orange, N.J., who can add a new level of athleticism to the program. “Mario Moody will bring an athletic element to our program with his length, athletic ability and finishing around the basket,” Hurley said. 6-foot point guard Kenny Ortiz is a former New Jersey Player of the Year who sat out last season after transferring from Southern Miss. “He looks phenomenal right now,” Hurley said. For all their recruiting accomplishments, no one knows better than the Hurleys that St. Anthony and St. Benedict’s — along with St. Patrick — consistently produce the top talent in New Jersey. “I think for us as college coaches now in this area,” Bobby said, “it’s more of a personal statement for us the first two days that we’re out, that we’re going to be at St. Anthony and we’re going to be at St. Benedict’s because those are the kind of programs that we want to be associated with.” RELATED CONTENT **Hurley recalls when Kabongo outplayed Kyrie