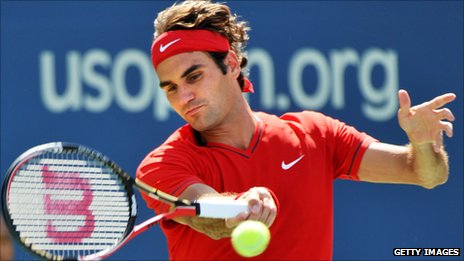 NEW YORK –While Roger Federer and the Williams sisters have all won multiple Grand Slam singles tournaments, Federer’s career stands in stark contrast to the sisters in terms of consistency. Federer is competing in his 48th straight Grand Slam event, while Venus and Serena have been on and off the women’s tour for reasons related to health, personal tragedy and outside interests. One day after Venus withdrew from the U.S. Open because of an autoimmune disease known as Sjögren’s Syndrome, No. 3 Federer cruised into the third round with a 6-3, 6-2, 6-2 rout of Dudi Sela of Israel in just 1 hour, 17 minutes. His 225th career Grand Slam tournament singles win moved him past Andre Agassi into second place on the all-time list. Jimmy Connors ranks first with 233 career major wins. After the rout, Federer, a five-time Open champ, was asked his thoughts on Venus’ situation and her career. “It’s tough, you know, I mean, I guess especially for an American to have that happen at the U.S. Open, Federer said of Venus. “But at least if she knows what it is, it’s a bit comforting. At least you know where to go from here, but it’s terrible timing. I can only wish her the best. She’s been a great player, a great champion. Hopefully she’ll stay around for the women’s game for a long time still.” That, of course, remains to be seen. At 31, Venus was already at an advanced age for women’s tennis, and an expert in her condition said Wednesday when the news broke that we may have seen the last of Venus at this level. “If the symptoms are severe, this could be career-ending,” Dr. Gary Wadler, the former U.S. Open tournament physician and now clinical associate professor at Hofstra North Shore-LIJ School of Medicine, told reporters. Venus has won seven career major singles titles, while Federer is the all-time men’s leader with 16. “Well, I mean, look, slams are not everything,” Federer said. “If it [withdrawing] happens, it happens. It’s not the end. There are other tournaments to play. “Sure, if this is, in your opinion, your priority of the year, then it hits you hard. If it wasn’t, then it’s not the worst.” At this stage of his career, slams are certainly the priority for Federer. Where he once seemed untouchable in that category, he now leads his arch-rival Rafael Nadal, 16-10, and Nadal is five years younger, at 25. (Pete Sampras is second on the all-time list with 14 majors.) Novak Djokovic, the No. 1 seed and top-ranked player in the world, own three majors, including two this year. Can Federer win another major? And can he do it here, where he has won five times in a row from 2004-08, beating, in order, Lleyton Hewitt, Agassi, Andy Roddick, Djokovic and Andy Murray? He is looking to become the first man 30 or over to win a Grand Slam singles title since Agassi won the Australian Open in 2003. The last man to win the U.S. Open over 30 was Sampras in 2002. “I’d rather be 30 than 20, to be quite honest,” Federer told ESPN. Next up is a third-round match with the winner of the Bernard Tomic-Marin Cilic match, and a potential semifinal with Djokovic looms ahead. But while health and other issues have derailed players around him (seven men have retired in this Open), Federer is still here, still going strong. He said before the tournament he plans to play for “many more years.” On this day, like so many before, he was just the better player. “Yeah, not much trouble on my serve, and from the baseline I also thought I had the upper hand,” he said. “When it’s like that, obviously it’s tough for the opponent, but I just think I was superior today.”