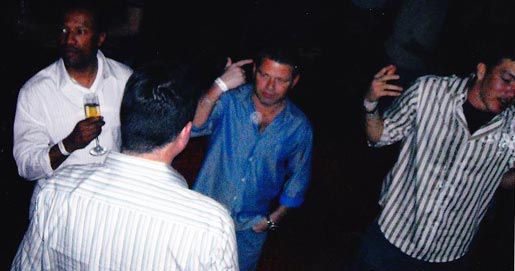 Everyone who has ever met Moe Hicks knows that he is a good and honorable man, a man who has worked for several decades as a basketball coach and teacher in New York City. But now for the second time in a period of months, Hicks, the St. John’s Director of Basketball Operations, has put the Red Storm in a negative light. In this picture obtained by Yahoo! Sports, Hicks, at left, is photographed along with then-Miami assistant basketball coach Jorge Fernandez (with back to camera), infamous Miami booster Nevin Shapiro and Miami football player Robert Marve. Shapiro told Yahoo! the picture was taken in October 2008 in the VIP section of a night club. (Hicks was not hired at St. John’s until 2010.) “I met Jorge Fernandez with [then-Miami assistant] Jake Morton,” Shapiro told Yahoo’s Charles Robinson. “After hanging out with them a few times, we became close and I did whatever I could to help them. As far as being out that night [at Dolce Ultra Lounge in October 2008], they were in my suite during the game earlier that day and I was introduced to Moe Hicks and two others [with the Miami basketball coaches].” “They came to my house around 9 to 9:30 at night and we shot the [breeze], and then we all went out to Dolce. Once there, about 15 guys from the football team showed up to meet me and that was all. Everyone knew who everyone was. It was no secret, and everyone trusted me running interference with any compliance or university issues.” Shapiro allegedly provided 72 Miami football players with benefits including cash, hookers, expensive meals and nights at strip clubs. He is currently serving 20 years for fraud connected to a $930 million Ponzi scheme. Hicks did not answer a phone call Friday morning, and Fernandez did not immediately return a phone message seeking comment. “The [Yahoo!] article involves a NCAA inquiry into another university’s athletics program,” St. John’s spokesman Mark Fratto said in a statement first given to the New York Post. “As is standard protocol in NCAA cases like this, we have no comment.” Earlier this summer, Hicks was questioned by the NCAA in connection with incoming St. John’s recruit Maurice Harkless. Harkless played his AAU career predominantly with the New York Panthers, but played two events in 2010 with the New York Gauchos, where Hicks served as director prior to coming to St. John’s. At issue was whether Hicks was considered by the NCAA an “individual associated with a prospect,” or IAWP as it relates to Harkless. In July, the NCAA decided Hicks was not because of their limited relationship, and Harkless was cleared.