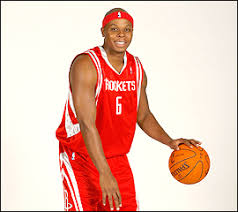 In their search to land a shooting guard for the post-lockout NBA, the Knicks worked out former Portland Trail Blazers guard Bonzi Wells Thursday and Friday. Knicks coach Mike D’Antoni was an assistant in Portland during Wells’ tenure in 2000-1. “I had a great camp,” Wells told The Star Press.com. “I’m a 34-year-old guy and I got up and down the court excellent. I shot the ball great. I played pretty good defense. I did the best I could to keep those little 20-year-old guys in front of me.” Wells, 34, was one of 17 free agents participating in a mini-camp at the Knicks’ Westchester facility. The 6-foot-5 Wells hasn’t played in the NBA since the 2007-8 season and has played in China and Puerto Rico since. He averaged 12.1 points in 10 NBA seasons. He is trying to resurrect his career while reassuring Knicks’ brass that he has matured from his troubled past with Portland, then known as the Jail Blazers. “With the interview process, they kind of ask you what you’ve been doing,” Wells told The Star Press. “I just told them, ‘I’ve been playing with the local Y for the last couple years and I’ve been coaching AAU, so that’s been my life the last couple years.’ I just stayed straight forward and was very honest. Hopefully they understood my sincerity.” “(D’Antoni) said, ‘I remember how young you were, and I thought you were a good guy. You were just in a bad situation, and I’m glad you’re at this point in your life.’ It makes you feel good when guys understand, because they’ve been 23 or 24 before. They know what it’s like to grow up and they see my maturity.” Wells said he’s now in a holding pattern, waiting to see what his options are. “When I got into the league the first time I walked into a lockout, so I’ve been here before and whatever’s going to happen is God’s will,” he told The Star Press. “I’m just excited I got the opportunity to be here. That was my biggest thing. If it doesn’t work out with these guys, there’s a lot of guys who’ll reach out to other teams and let them know that you’re a really good player.”

FSU's Singleton Works Out for Knicks