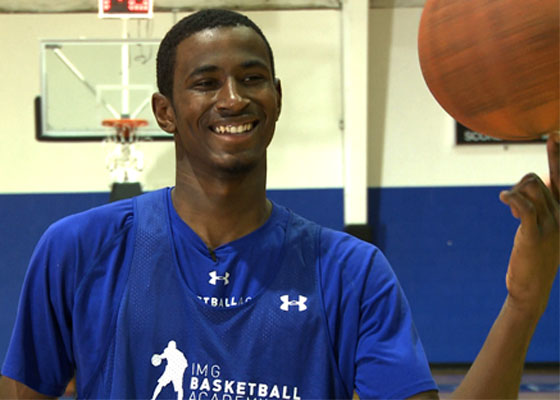 As far as recruitments go, those of DeAndre Daniels and Lamont “Momo” Jones are beginning to look Lance Stephensonesque. They are mysteries shrouded in enigmas. As far as the 6-foot-8 Daniels goes, a source inside his recruitment said he had no knowledge of any impending announcement this weekend. “He could announce tomorrow and I wouldn’t be surprised, or he could announce the day before school starts,” the source said. UConn, which has a scholarship to give, has reached out to the multi-talented wing. “UConn has placed a couple phonecalls,” the source said. The Huskies would make perfect sense for Daniels. They bring back talented young guards and wings in Jeremy Lamb, Shabazz Napier and Roscoe Smith as well as forward Alex Oriakhi, but could certainly use an agile 6-8 scoring wing to help compensate for the loss of Kemba Walker. Head coach Jim Calhoun recently said in New York that the defending champs had nine scholarship players and planned to add a 10th for the 2011-12 season. The Huskies offered Brewster forward Mitch McGary the option of enrolling in 2011 instead of 2012, but that’s not happening, according to Brewster coach Jason Smith. “There has never been any doubt,” he said by text. Oklahoma State has also recently reached out to Daniels, the source said, and Texas is “still in the mix.” Kansas is on the “backburner” because the program is not known for featuring its wings, the source added. Through it all, Daniels remains at IMG and is not speaking to the media. “He’s here,” IMG coach Andy Borman told SNY.tv Thursday. “We love him. We have no comment on DeAndre’s recruitment and there is no timetable.” As for Jones, he was seen Wednesday on the Seton Hall campus with head coach Kevin Willard by John Lopiano, the assistant sports editor of The Setonian. “Just saw Momo Jones and Kevin Willard talking outside the side door of the rec center about ten feet from me,” Lopiano tweeted. Jones will take officials to Marquette, South Florida and Pittsburgh and unofficials to Seton Hall (Wednesday), Iona (Friday), Hosftra (Monday) and UMass (Tuesday), per Dermon Player, the former Seton Hall assistant now advising Jones on his recruitment. The Arizona transfer has said he would like to land closer to his New York City home, but is apparently considering other Big East schools as well. “As soon as Momo feels comfortable with who he feels in his heart is where he wants to go, he will pick a school,” Player told SNY.tv by text. FREE THROWS Former West Virginia forward Danny Jennings of Staten Island has verbally committed to transfer to Long Beach State…Rodney Purvis will play pick up ball Thursday at Duke, according to his AAU coach, Tony Edwards….Hofstra officially announced the signing of former UConn assistant Pat Sellers. Former UConn wing Jamal Coombs-McDaniel will visit Hofstra in the coming weeks, a source said. Also, Former Penn State guard Taran Buie visits Hofstra Friday, per Jim Hart of Albany City Rocks. He is considering Towson and Colorado, too…Memphis will play Louisville on Dec. 17 at 3 p.m. in Louisville. The return game will take place in Memphis in the 2012-13 season.

Fredette Lights it Up at Knicks Workout