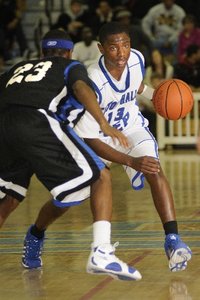 New York Panthers coach Gary Charles confirmed by phone Wednesday that Seton Hall Prep point guard Sterling Gibbs has asked for his release from Maryland and new coach Mark Turgeon. “He wants the release,” Charles said. “The family has asked for the release and they’re waiting to see if they can get the release.” Gibbs was not immediately available for comment but reportedly told NYCHoops of Turgeon, “He doesn’t really know me and my game.” The NCAA late signing period ends May 19 and a dead period runs from May 19-28, meaning no off-campus recruiting is permitted. So Charles would like the matter resolved quickly. Regardless, Gibbs cannot sign a second National Letter of Intent. “They [Turgeon and Gibbs] spoke last night but the coach asked him to wait a couple days,” Charles said. “I told him not to wait a couple days because they don’t have much time.” Charles confirmed that Miami, Florida, Louisville, Seton Hall, Providence, Texas and Colorado had reached out to him about Gibbs. “They’ve all contacted me,” Charles said. Complicating matters is that a source close to Gibbs said the family was still waiting to meet with Turgeon. “We’re going to talk to the coach,” the source said.