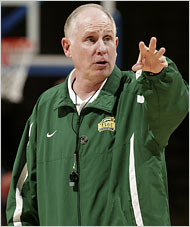 Jim Larranaga’s move to Miami from George Mason could have an impact on several players from the New York/New Jersey area. Sophomore guard Sherrod Wright of Mount Vernon, redshirt-freshman forward Paris Bennett of Linden, N.J., and junior forward Ryan Pearson of Christ the King are all on the George Mason roster. Mount Vernon coach Bob Cimmino and St. Patrick assistant Rae Miller said it was too early to comment on how the coach’s departure may impact those players. Vaughn Gray, a senior guard at St. Benedict’s Prep who has signed with George Mason, remains committed at this time. “I just spoke with Vaughn at 5 p.m. tonight and he spoke with GMU assistant coach Mike Huger earlier this afternoon,” former St. Ben’s assistant Billy Diamond said. “Obviously, Vaughn is disappointed about Coach Larranaga not coaching at George Mason next year but he respects his decision. I told Vaughn and his parents when he was deciding what college to attend, he should consider multiple factors including but not limited to, Coach Larranaga being there as head coach. We were all aware of the possibility of him leaving in the near future since he’s been such a highly successful coach at GMU. “Vaughn’s decision to attend GMU was based on multiple factors besides just Coach Larranaga and his staff, such as the academic and social envrionment and reputation at George Mason, as well as the basketball program, facilities and campus. Tonight I spoke with GMU Athletic Director Tom O’Connor and he assured me that he intends to hire a very qualified coach to continue to lead their very successful basketball program. “Vaughn and his family will speak with Tom on Monday and as of right now he is still committed to attend George Mason. However, he will wait until he sees who the new head coach is, meet with him and re-evaluate his situation at that time. Until then, Vaughn still intends to honor his commitment.” Point guard Corey Edwards of Christ the King has also signed with George Mason. “As soon as I speak to the AD over there and see what he’s going to do with the coaching job, that’s when I’m going to decide whether I want to back out of my letter of intent or whether I’m going to stick with George Mason,” Edwards said Friday by phone. He said George Mason assistant Mike Huger recruited him and he was uncertain what Huger would do. “He wasn’t aware what Coach L was going to do, but when I spoke to him yesterday everything was in the air,” Edwards said. “I haven’t spoken to him since.” FREE THROWS Former Virginia Tech assistant and Syracuse guard Adrian Autry will replace Rob Murphy on the Syracuse staff, per The Washington Post…Texas freshman forward Tristan Thompson is expected to announce his intentions to declare for the NBA Draft, according to multiple reports. Thompson initially said he would return for his sophomore season. RELATED CONTENT **Gray, Edwards commit to George Mason