Fredette Wishes He Were Playing in Final Four 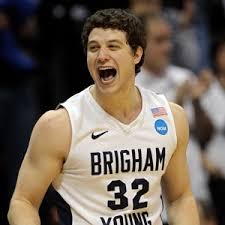 HOUSTON — Jimmer Fredette is at the Final Four. But he’s here as a fan, not a participant. The Glens Falls, N.Y. native was named the Associated Press Player of the Year on Monday, but mostly he wishes he were still competing in the NCAA Tournament. “Of course, I’ve always imagined that ever since a little kid, and even today I still do,” said Fredette, who averaged 28.9 points for a BYU team that lost in overtime to Florida in a Southeast Regional Sweet 16 game. “There’s four great teams in there now and we were close. We were close to getting there and you could almost taste it.” Fredette beat out UConn junior Kemba Walker (among others) for the award, yet Walker and the Huskies will face Kentucky Saturday in a national semifinal at Reliant Stadium, while Fredette watches from the stands. “Either one of us would have deserved to have won this award,” Fredette said of Walker. “He’s had a great year, I’ve had a great year. I congratulate him in all that he has done, and sometimes there’s only one winner, so there’s not much you can do about it. But he’s just as deserving as I am.” While Walker continues to play, Fredette is adjusting his mindset to the upcoming NBA Draft in June. DraftExpress.com projects the 6-foot-2 Fredette going No. 17 to the Philadelphia 76ers. “I’ve heard tons of different stuff,” Fredette said. “You hear stuff from everybody. Everybody has their own opinion. I just feel like as long as I can make a team and hopefully get into the right situation, I can be very successful.” Fredette admitted it was “definitely different” changing his mindset to thinking about a pro career. “It’s become more of a business now,” he said. “I realized that now within the last couple days. I’m just looking forward to starting my career, though, this is what I’ve dreamed of as a kid. This is what I’ve wanted to do. It’s a great way to make a living, doing something you love.” BYU coach Dave Rose said he’s heard from NBA GM’s picking in the mid- to late-first round who want to know who Fredette projects to be. Is he J.J. Reddick? Is he Eddie House? Who is he? “That’s what everybody wants to know,” Rose said. “And what I tell them is that he’s Jimmer Fredette. In my opinion, if you’re worried about him not being able to do this, or not being able to do that, what you need to do is just play him, and let the other team figure out what he really is. “He’s a guy who can complement any type of style…His best quality is as a teammate and how he can try to figure how he can help his team win games. He can do it from making baskets. He can it from assisting baskets. He can do it from getting defensive rebounds. He’s a competitive player.” So competitive that he wishes he were playing in the Final Four, not watching. “He loves to win, he loves to play,” Rose said. “The most disappointing part of our season this year was when we have the loss to Florida this year in overtime and we’re in the locker room, and there’s no more games. “I’m sure he would trade all these trophies for another game.” RELATED CONTENT **NBA ‘looking into’ Jay-Z/Kentucky visit **Kentucky’s Lamb latest New York Panther in Final Four **Emotions too high for Book to watch Kemba **Calhoun fueled by last year’s slights **NCAA Tournament All-Regional Teams **Kentucky President: ‘This banner won’t come down‘ **Kentucky’s Knight, Lamb spurned UConn for ‘Cats **Sullinger says he’ll stay at Ohio State **New York City, Oak Hill repping well in NCAAs **Sullinger will have late uncle on mind in Newark **Source: Williams would consider Texas **Latest Calipari point guard, Brandon Knight comes up big **Top freshmen weighing one and done