// In this interview with ZAGSBLOG

During the 2007-8 season, Hicks could have fielded a backcourt at Rice High School that featured Kemba Walker and Lamont “Momo” Jones.

Instead, while Hicks was abroad in Amsterdam on a college all-star tour that September, Jones withdrew from Rice and headed to American Christian (Pa.). He spent his junior year there playing alongside Tyreke Evans before the school closed, forcing him to finish up his high school career at Oak Hill Academy in Mouth of Wilson, Va.

“They would have been great,” Hicks, now the director of basketball operations at St. John’s, said of a potential Walker/Jones backcourt. “The best dynamic duo at Rice ever, even better than Kenny Satterfield and Andre Barrett. They would have been one of the best in the country.” 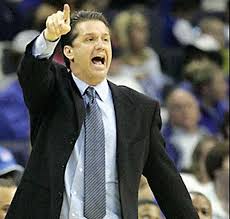 NEWARK — If early signs are any indication, John Calipari and company aren’t exactly winning over the locals here.

While the other teams — Marquette, North Carolina and Ohio State — put on extensive open practices for the fans Thursday, Kentucky held an extremely short workout which featured free throw shooting and a game of “Knockout.”

The performance inspired a smattering of boos.

“Thanks for giving me time for a nap,” one fan in a suit shouted at Calipari, who shot back a short glance.

NEWARK — When Jared Sullinger steps on to the Prudential Center court Friday night against Kentucky in an NCAA Tournament East Regional semifinal, he may take a moment to reflect about a man who can’t be there to share it with him.

Harold “Briefy” Sullinger, Jared’s uncle who won a state championship under Gary Williams at Woodrow Wilson High School in Camden, N.J., passed away Dec. 3 of an apparent heart attack. He was 58.

“[He will be] a big motivation,” Sullinger said Thursday.

NEWARK — Kyrie Irving and Dexter Strickland played only half a season together at Elizabeth (N.J.) St. Patrick High School.

Yet in their short time together on the court, they made a historic impact.

The duo led the Celtics to the New Jersey Tournament of Champions title in 2009, the school’s third in four years under head coach Kevin Boyle.

Strickland, a natural shooting guard, then went off to North Carolina to play point guard.

Every year, New York has a few top tier players. For the class of 2013, Terrence Samuel is an elite star.

A 6-foot-3 point guard from Brooklyn South Shore, Samuel (pictured on left) has already made a lot of noise on the high school court, as well as the AAU circuit with New Heights.

“He’s one of the best players in the country in terms of size, speed and skill level,” said New Heights AD Kimani Young. “He’s a 6-3 point guard who can dominate a game without scoring. He has tremendous upside. He’s already a solid Big East/ACC recruit.”

NEW YORK — The Knicks are running out of gas.

That’s what Amar’e Stoudemire said after New York lost its fourth straight and seventh in eight games, 111-99, to Dwight Howard and the Orlando Magic Wednesday night at Madison Square Garden.

“It’s a lot of games in a few nights…it catches up with you at times,” said Stoudemire, who managed just 13 points on 6 of 20 shooting.