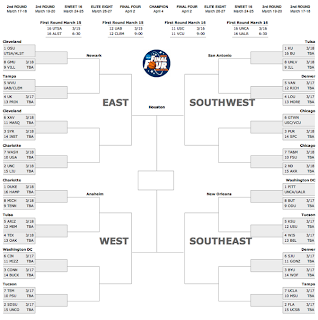 Your NCAA Tournament bracket may be in shreds, but Joe Pearlman’s isn’t. An East Brunswick, N.J., native, Pearlman is one of just two people in ESPN.com’s bracket tournament — out of more than 5.9 million entries — who has the correct Final Four. Yes, Pearlman picked UConn, Kentucky, Butler and Virginia Commonwealth. VCU, really? “That was just luck,” he told Lynn Zinser of The New York Times. Pearlman told her he picked teams with coaches he had high opinions of. He initially wanted to pick USC, but VCU beat the Trojans in a First Four game. He stuck with VCU throughout and now leads the ESPN tournament and stands to win $10,000. “When I asked [my 15-year-old son] if I could join, he said, ‘Oh, Dad, don’t join any group,'” Pearlman told the Times.

Gibbs, Lee, Williams to Test Waters, But Window is Small