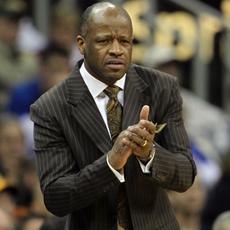 Former Missouri coach Mike Anderson is officially the new head man at Arkansas. The former Nolan Richardson assistant will reportedly receive $2.2 million per year over seven years. Arkansas won the 1994 national title with Richardson as head coach and Anderson as an assistant. “We are extremely excited to welcome home Mike Anderson to the University of Arkansas as our new head men’s basketball coach,” Arkansas AD Jeff Long said. “Mike is one of the outstanding head coaches in college basketball. His teams play an exciting brand of basketball that has already proven successful at both UAB and Missouri. “Under Mike’s leadership, I am confident the Razorbacks will be successful in the future on and off the court. The decision to hire Mike Anderson as head coach is based on my firm belief that he is the right person to lead the Razorback program today and in the years to come.” Sports by Brooks reported that after Anderson informed Missouri he was leaving, the school removed the sign marking his personal parking space. The same outlet later said the Missouri SID said the sign had been “stolen.” Steve Walentik of the Columbia Daily Tribune reported that Anderson’s buyout at Missouri was $500,000. “It is a tremendous honor to be named the head men’s basketball coach at the University of Arkansas,” said Anderson, a Birmingham, Ala., native. “I want to thank Chancellor (Dave) Gearhart and Athletic Director Jeff Long for this opportunity to lead the Razorback Basketball program. I am extremely excited to once again be a part of this special University and Razorback Athletics. With the continued passionate support of all Razorback fans, I am confident that we will have the opportunity to succeed on and off the court and continue to build on the University of Arkansas’ championship tradition.” Anderson led the Tigers to three NCAA tournament appearances, including a loss in the Elite Eight in 2009. The Tigers qualified for the tournament this year and fell to Cincinnati in a first-round game last weekend in Washington, D.C. The Tigers were a 8-8 in the Big 12. Anderson replaces John Pelphrey, who was fired March 13 after four seasons in which he posted a 69-59 record, including an 18-13 mark this season.