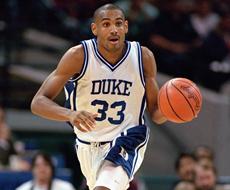 Grant Hill has struck back at Jalen Rose. Rose called Hill and his former Duke teammates “Uncle Toms” in an ESPN documentary  Sunday on the “Fab Five” early 1990s Michigan team. “I am a fan, friend and longtime competitor of the Fab Five,” Hill, now with the Phoenix Suns, wrote in Wednesday’s New York Times. “It was a sad and somewhat pathetic turn of events, therefore, to see friends narrating this interesting documentary about their moment in time and calling me a bitch and worse, calling all black players at Duke ‘Uncle Toms’ and, to some degree, disparaging my parents for their education, work ethic and commitment to each other and to me. I should have guessed there was something regrettable in the documentary when I received a Twitter apology from Jalen before its premiere. I am aware Jalen has gone to some length to explain his remarks about my family in numerous interviews, so I believe he has some admiration for them… “To hint that those who grew up in a household with a mother and father are somehow less black than those who did not is beyond ridiculous. All of us are extremely proud of the current Duke team, especially Nolan Smith. He was raised by his mother, plays in memory of his late father and carries himself with the pride and confidence that they instilled in him. “The sacrifice, the effort, the education and the friendships I experienced in my four years are cherished. The many Duke graduates I have met around the world are also my “family,” and they are a special group of people. A good education is a privilege.

Duke's Irving May Return for NCAAs