Jabarie Hinds and Achraf Yacoubou both played at the LeBron James Skills Academy last summer. They are both lightning quick, high-IQ guards headed to Big East schools. And now they are co-winners of the New York State Mr. Basketball Award. The other finalists for the award were Rice’s Jermaine Sanders and Lincoln’s Shaquille Stokes. “Jabarie shows class on and off the court and is also a great player,” said the 6-foot-4 Villanova-bound Yacoubou of Long Island Lutheran. “I just feel really happy and pleased and I thank my team for pushing me to the limit, and to the people who picked me as well.” Yacoubou averaged 19.5 points, 9.7 rebounds, 2.8 assists and 2.5 steals for a LuHi team that will play for the New York Class A Federation title against the Class A Public School champ on March 25. “Ash is an incredible competitor,” said LuHi coach John Buck. “He’s strong, athletic and shoots it well. His passion to defend and rebound is what truly makes him a special player. Ash is not only an excellent player, he’s a terrific young man. He works hard in the classroom and is a great teammate. His upside as a player is tremendous because of his physical tools and willingness to do whatever it takes to become the best he can be. He will be an outstanding representative of Villanova, on and off the court.” Yacoubou and Hinds are the third pair named co-winners of the award since 1986. Greg Koubek of Shenendehowa and King Rice of Binghamton shared honors in 1987. Current Indiana Pacers guard Lance Stephenson of Lincoln and current Syracuse guard Brandon Triche of Jamesville-DeWitt divided the award in 2009.

Jonathan Mitchell, who, like Hinds, played for Bob Cimmino at Mount Vernon High School and who just ended his career at Rutgers, captured the award solo style in 2006. “I think he’s better than them all,” Cimmino told The Journal News of the 6-foot Hinds. “I just think when somebody asks, I’m going to tell them I coached Mr. Basketball.” The West Virginia-bound Hinds poured in 54 points in two games during the SNY Invitational in January. He scored 20 points Wednesday when Mount Vernon beat upstate rival Newburgh 72-49 in the Class AA regional semifinals. The Knights will next face Section 4 champ Union-Endicott on Saturday at 2:45 in the regional final at SUNY Cortland. If Hinds and Mount Vernon win that game, they will advance to the New York State Federation finals in Glens Falls for the first time since 2008. RELATED CONTENT **SNY feature on Jabarie Hinds (Photos courtesy Newsday, The Journal News)

Syracuse, UConn to Face Off in Big East Semis 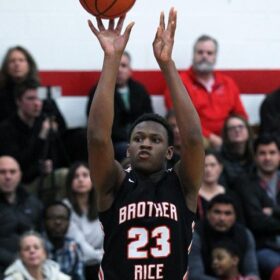