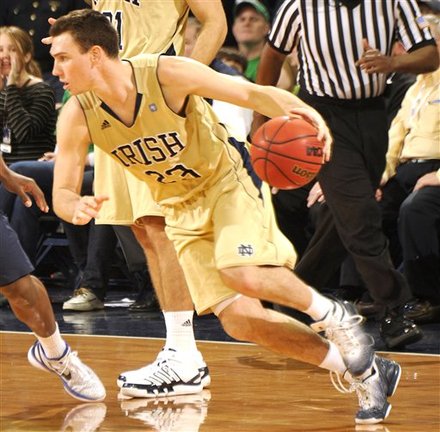 Jerry Palm’s latest NCAA tournament bracket is up and his four No. 1 seeds are Ohio State, Kansas, BYU and Pitt. Palm still has 11 Big East teams in the Big Dance but says things can change here in the last two weeks of the season. “Nobody’s seed is locked in with two weeks to go,” Palm said Tuesday in a phone interview. “I think Marquette (17-11, 8-7 Big East) has work to do. I don’t know that Cincinnati (22-6, 9-6) would survive a three-game losing streak with their bad non-conference schedule.” Notre Dame (24-5, 13-4) is making a late charge toward at least a share of the Big East regular season title after Monday’s 93-72 rout of Villanova in which Ben Hansbrough and Tim Abromaitis combined for 60 points and the team drained a program-record 20 3-pointers. The Irish are just one half game behind Pitt (25-4, 13-3), yet Palm says Notre Dame remains a 2 seed. “They’re not only chasing Pitt in the race for a 1 seed,” he said. “I’ve got seven teams ahead of Notre Dame. They have to pass four of them to get to the one line. Pitt losing again doesn’t necessarily put Notre Dame ahead of them.” Pitt visits South Florida Wednesday before closing the regular season against struggling Villanova. Notre Dame’s last game is Saturday when they visit Kemba Walker and UConn. What if Notre Dame were to win out and make a run to the Big East tournament final or win the conference tournament? “Win all the way out and anything can happen,” Palm said. “They only have an outside shot [at a 1 seed].” As for surging St. John’s, winners of six straight and eight of nine, Palm has them as the No. 5 seed in the East, along with No. 1 Ohio State and No. 2 Notre Dame. Asked if the Johnnies could move up, Palm said, “Sure. There are chances for quality wins ahead of them.” Struggling Villanova is no the No. 7 seed in the West, along with No. 1 BYU and No. 2 Purdue. “They have lost five out of seven, but their only bad loss was to Rutgers,” Palm said of the Wildcats. One thing to keep in mind here, Palm said, is that the NCAA selection committee will sometimes move teams up or a down a seed so as to avoid intra-conference matchups early on. “When the committee brackets 11 Big East teams, teams may get moved off their true seed to keep them as separated as possible,” he said. “I had Villanova as a 6. But I had to move them to a 7 to keep all these big East teams separated.” And like ZAGS on Facebook.

Applications Pouring in at Monmouth

Knicks Bulk Up With Jeffries, Brown