Coach K: 'We're not looking for Kyrie to come back' | Zagsblog
Follow @adamzagoria

Coach K: ‘We’re not looking for Kyrie to come back’ 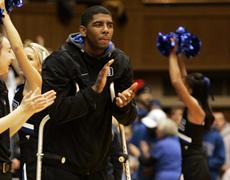 NEW YORK –During St. John’s stunning 93-78 upset of No. 3 Duke Sunday afternoon at Madison Square Garden, a group of little boys in St. John’s jerseys tried to get Kyrie Irving’s attention by shouting his name toward the Duke bench. Irving didn’t acknowledge them and remains glued to the bench for the foreseeable future because of the toe injury suffered Dec. 4 against Butler. “We’re not looking for him to come back, we’re looking for him to get well,” Duke coach Mike Krzyzewski said. Irving, a freshman from West Orange, N.J., is due to get his cast off Friday, but won’t play anytime soon. “Sometime late this week,” Coach K said of the cast removal. “What that does is triggers a new rehabilitation program, which takes a long time.” Irving was averaging 17.4 points and 5.1 assists in Duke’s first eight games of the season. Duke fans are hoping he can return for March Madness.

To Go Dancing, St. John's Still Has Work Ahead