First-year coach Steve Lavin started off his Big East schedule with a bang by notching a huge 81-71 victory over the Mountaineers in Morgantown, West Va.

Dwight Hardy scored 20 points and Justin Brownlee and D.J. Kennedy added 17 apiece as the Johnnies notched their first win over West Virginia since 2002 and their first victory at the West Virginia University Coliseum since 1999.

“I’m so pleased for our seniors because they haven’t had as much success here as they would’ve liked to,” Lavin told SNY.

NEW YORK -- Within the first few

Ticket information: Student Tickets: $5 per day (Must Enter Gym by 12 Noon each day) General Admission Tickets: $10 per day; Reserved Tickets: $20 per day; Season Pass: $25 for access for all three days.

For more info check out www.planetathlete.org.

NEWARK, N.J. — Three days after suffering a flesh wound during an armed robbery-gone-bad in Harlem, Jeremy Hazell returned to the Seton Hall bench Tuesday night during their 64-55 win over South Florida.

Hazell was shot at four times on Christmas night as he ran down 104th St. attempting to escape four men who attacked him outside of his building. He was  hit once and suffered a flesh wound on his side.

After missing Sunday’s game, he was back sitting on the Pirates bench and cheering on his teammates.

“Unfortunately I’ve probably said this way too many times since I’ve been coaching but we’re just thankful he’s alive. He’s OK. Obviously he’s a little mentally shook up as anybody would be. But physically he’s one lucky guy.” 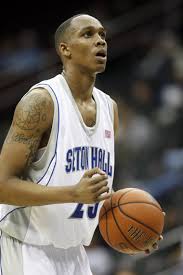 “I plan on going to Alabama and Auburn but I haven’t set up the visits yet,” Hall reiterated Tuesday by phone.

Hall said he had not committed to Memphis.

In case there was any doubt about the talent that comes out of the New York-New Jersey-Philly area, this week’s Player of the Week results should put them to rest.

**Kentucky freshman Doron Lamb of Queens was named SEC Player of the Week after he scored 32 points in leading the Wildcats to a win over Winthrop. Lamb went 11 of 12 from the field, making 7 of 8 3-pointers to break Kentucky’s freshman record of 31 points set by another New York City native, Jamal Mashburn.

**USC junior guard Jio Fontan of Paterson, N.J., a former star at St. Anthony, was named the Pac-10 Player of the Week after averaging 17 points, 4 assists and 3.5 steals in wins over No. 19 Tennessee and Lehigh. Those were just the second and third games of the season for the Fordham transfer since he became eligible for the game at Kansas Dec. 18.