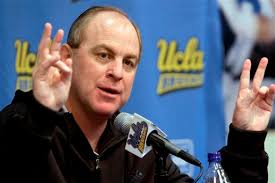 NEW YORK — If it seems like UCLA head coach Ben Howland is ramping up his recruiting in the Northeast, that’s because he is. “We’ve tried to stick our hat in the ring here on a couple kids and we’re involved with a couple kids right now that I think are really good players out of this area,” Howland said Tuesday in advance of his team’s game Wednesday with No. 7  Villanova in the NIT Season Tip-Off at Madison Square Garden. Howland cannot comment on unsigned prospects, but St. Anthony junior point guard Kyle Anderson, the No. 1 floor general in the Class of 2012, recently took an unofficial to the Los Angeles school. UCLA has also recently gotten involved with South Kent (Conn.) junior shooting guard Ricardo Ledo, a Providence native and the No. 2 shooting guard in that class. The Bruins swung and missed on Mount Vernon point guard Jabarie Hinds when he chose West Virginia, and also made a late push for Brewster’s Naadir Tharpe, who picked Kansas, and uncommitted guard Elijah Carter. (Carter, who will sign late, has recently been offered by Iowa and received interest from Oklahoma, according to his AAU coach.) SEC coaches like John Calipari of Kentucky and Bruce Pearl of Tennessee and Big East coaches like West Virginia’s Bob Huggins, Louisville’s Rick Pitino and Pitt’s Jamie Dixon have already established they can come into the New York/New Jersey area and swipe players away from the local schools. Now UCLA and its storied tradition is joining the hunt as well. “I don’t think it’s a generalization, I think it’s based on each specific kid,” Howland said. “Every kid’s different. “For us we have to get not only good players, but also good students. So our pool of recruiting is much smaller than others because of the academic requirements at UCLA.” Follow Adam Zagoria on Twitter

Fields Making a Statement for Knicks