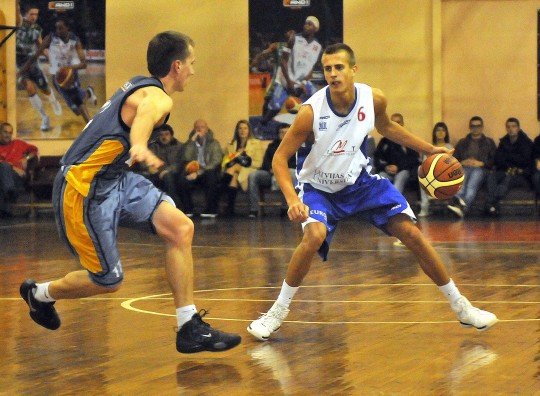 Haralds Karlis, a 6-foot-6 shooting guard from the Canarias Basketball Academy in the Canary Islands, verbally committed to Seton Hall head coach Kevin Willard. Willard had visited the Academy in the last two weeks to see Karlis, a native of Riga, Latvia. The Academy also produced current Seton Hall freshmen Patrik Auda, a 6-9 wing player, and Aaron Geramipoor, a 6-11 forward. “Haralds is a 6-6 two guard who is a phenomenal perimeter shooter,” Canarias coach Rob Orellana said by phone Tuesday morning. “He’s a very, very good athlete. He’s an athlete who gets above the rim. “He’s a tremendously hard worker. He’s my captain of the academy. We have 15 to 16 Division 1 players and he’s the best of our academy this year. He’s my hardest worker. He’s the first one in the gym, the last one out. I can’t speak higher of a kid like Haralds Karlis. He’s in the same mold of Patrik Auda as far as working.” Karlis joins Aaron Cosby, a 6-2 guard from Northfield (Mass.) Mount Hermon, in Seton Hall’s 2011 recruiting class. The Pirates will lose perimeter players Jeremy Hazell, Keon Lawrence, Eniel Polynice, Jamel Jackson and possibly Jeff Robinson to graduation. They hope to hand out between five and seven scholarships this year and Karlis figures to get good playing time. “Seton Hall has an opportunity for him and has an opportunity to play minutes,” Orellana said. The commitment was first reported by Seton Hall’s Trove. RELATED CONTENT **Seton Hall’s Pope stares death down twice **Seton Hall hoping Robinson gets waiver Follow Adam Zagoria on Twitter